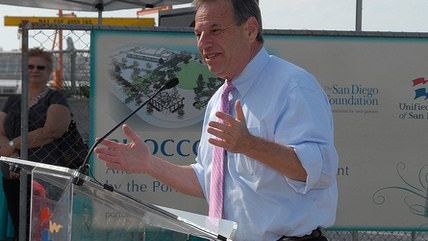 So far, 14 women have come forward to accuse San Diego Mayor Bob Filner of sexual harassment. That's one for each day he has spent in therapy over his behavior. The latest news is that he's back from his two-week intensive training in not fondling women. Except that he isn't supposed to be back until next week. His chief of staff says he has completed the full training. He just started earlier than reported. From Scripps and 10News in San Diego:

San Diego Mayor Bob Filner's chief of staff confirmed to 10News that the mayor began his therapy a week early and has already completed the program, but a statement from his attorneys said he will finish his therapy Saturday.

In a press conference in late July, Filner said he would begin his two-week therapy session on August 5.

He was originally scheduled to come back to work August 19, but Filner is reportedly coming back to San Diego Friday.

According to Filner's attorneys he will be taking "personal time" next week and will not be available. Also, the city changed the locks on his office while he was away in order to preserve evidence.