The Newsroom Approaches the Occupy Movement. Maybe it Will Stumble Upon Libertarian Populism.

Everybody hates crony capitalism (except the cronies) 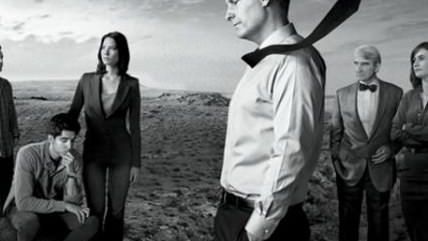 Paul Krugman didn't even bother to engage on what "libertarian populism" actually means in his effort at a takedown in a recent column, as Jesse Walker pointed out last week.

Timothy Carney over at the Washington Examiner has been very good at really hitting what the phrase stands for in his regular criticism of federal-level crony capitalism. Today he hits a few goals for libertarian populist economic reforms:

» Break up the big banks, and/or place stricter safety and soundness rules on them: Large banks profit from the presumption of a government bailout and the moat created by regulation. They are creatures of government, and they are insured by government, and so laissez-faire talk here is misplaced.

Free-market types making this argument include Sen. David Vitter in legislation, the Fed's Richard Fisher at CPAC,  and many others.

» Cut or eliminate the payroll tax: A tax on your first dollar means you are paying for Warren Buffett's retirement before you even buy groceries for your children. Richer people live longer, and so they're more likely to enjoy Social Security for longer. Also, the tax is capped at about $115,000 in income, meaning it's regressive. Since it's not really funding Social Security or Medicare — on the margin, they're both funded by general revenues now — let's quit pretending and scrap this tax or scale it back.

» End corporate welfare: Republicans are basically the only ones who voted against reauthorizing the Export-Import Bank. Conservative, free-market lawmakers Mike Lee and Justin Amash have introduced bills to abolish it. The agency puts taxpayer money at risk to subsidize Boeing sales.

Reading his list reminded me of the second season premiere of The Newsroom, which aired last night. I ripped the show last season and watched every episode with revulsion, like a masochist. Aaron Sorkin's worship of progressive technocrat policies, historical revisionism, and dismal attitude that people were just too dumb and uneducated to govern their own lives landed him on our list of 45 "enemies of freedom."

The premiere of the second season approaches the origins of the Occupy movement, so I'm bringing it up in the context of Carney's attitudes on banks and corporate welfare. One of the newsroom staffers finds his way into the early organizing of the Occupy movement (this show takes place two years ago, all the better for Sorkin to game the story to whatever point he wants to make). He hysterically describes the Occupy movement as potentially being America's "Arab Spring," a comparison so misguided and tone deaf that I actually laughed out loud. Even if we consider the Arab Spring an inspiration and account for the idea that the speaker didn't know at the time what would come out of the Occupy movement, the very idea of pushing for political or corporate reform in America can't reasonably be compared to the fight for some very basic freedoms in Middle Eastern countries.

Anyway, at one point the journalist sits down with an early Occupy organizer to talk about their goals and her cynicism of the media. She's already insistent the media is going to get the story wrong (as in, they're not going to say what she wants them to say, which is the same thing). Unfortunately, she speaks fluent Aaron Sorkinese, so at points she was speaking too quickly to grasp everything she was saying. She went on a rant about banks and Wall Street, quickly tossing out "limited government" in an angry tone before mentioning the cozy, crony relationship between banks and the United States, making many of the same points as Carney. It appeared as though she was saying that bank industry conservatives claim to be for "limited government" in order to demand cutbacks while at the same time using their power to push big government policies that benefit themselves. Unfortunately I was not able to determine exactly how nuanced the argument she was making. Given that this is Sorkin, it's possible she didn't understand the relationship and just confused "limited government" with crony capitalism as though the two were inevitably related. It's a very common attitude among progressives, and to be fair, there are certainly plenty of examples to point to.

I am holding out a slight bit of hope that Sorkin knows the difference and will ultimately recognize that the Tea Party and the Occupy movement are both very much interested in some of the exact same issues, but are coming to the same place from different directions. I won't hold my breath, though, given that he spent the first season trying to portray Tea Party members as mean-spirited, petty rubes being manipulated by sinister corporate masters while these new Occupy folks are well-meaning idealists.