Aide to Gun-Hating Rep. Conyers Gets Special Treatment After Toting a Pistol Into a Federal Courthouse 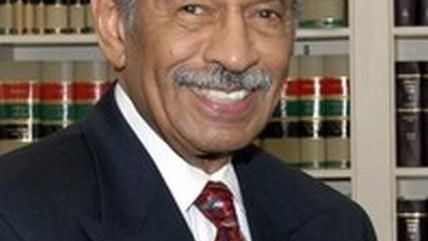 Rumor has it that

Rep. John Conyers (D-Michigan) has never seen a restriction on firearms ownership he didn't like, but he would seem to cast a protective shadow over those close to him who violate the gun laws he favors. It's good to have friends in high places, especially when doing things those friends have been laboring to make very illegal for the rest of us.

From the Detroit Free Press:

The sign on the federal courthouse in Detroit reads plain and simple: No weapons allowed.

But unlike others caught doing the same thing, the Michigan Democrat's clerk didn't lose her job — or get criminally charged.

Huh. So, what happened to Conyers' Detroit office manager, Betty Petrenz, who packed heat into the verboten sanctum of a federal building? Reports the Free Press, "She got a ticket for having a gun on federal property and was recommended for pretrial diversion."

Not everybody gets off quite so easily.

Petrenz's fate stands in contrast to what happened to three others caught with guns inside federal court:

One woman — a clerk who worked at the courthouse for more than two decades — was fired last year after security officers discovered a gun in her purse.

A male law clerk for U.S. District Judge Avern Cohn agreed to resign after a gun was found in his briefcase last year.

Another woman, a real estate agent who was headed to bankruptcy court and had a gun in her purse (she had just shown a property), was criminally charged. Her gun permit had expired. She eventually got diversion.

According to court officials, all four individuals who were cited for having guns had permits to carry them, but accidentally brought them into the federal courthouse.

Petrenz's attorney is quoted as saying that she made an "honest mistake," but so do so many other people who are penalized under draconian laws. Aside from the cases cited above, Brian Aitken was sentenced to seven years in New Jersey for inadvertently breaking firearms laws that he made every effort to obey. His ordeal ended only after two years when the convictions (except one very obscure one) were overturned amidst public outcry.

There's no evidence, yet, that Rep. Conyers actively intervened to win leniency from draconian and stupid laws for Petrenz, though it's clear she was given much gentler treatment than others in her position. Honestly, nobody could blame Conyers if he did help a trusted staffer. But it's too bad he favors such draconian and stupid laws, and rough treatment, for the rest of us.