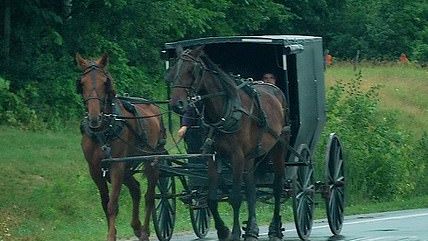 It's likely that members of the Amish community have not seen either Gasland or Gasland Part II. But they do have the possibility of fracking coming to their neck of the woods, and their concerns are a bit different from those of environmentalists. The Associated Press reports:

In parts of Ohio and Pennsylvania where horse-drawn buggies clip-clop at the pace of a bygone era, Amish communities are debating a new temptation — the large cash royalties that can come with the boom in oil and gas drilling.

In some ways, Amish attitudes toward hydraulic fracturing, or fracking, are as different from the outside world as their clothes and traditions. Instead of worries about air and water pollution, they're focusing on people's souls.

"Amish are no different than anybody else. The power of big money can bring spiritual corruption," said Jerry Schlabach, an Amish resident of Berlin, Ohio. "If we can keep our values and adhere to biblical principle, then it can be a very positive thing," he said.

Reuben Troyer, who recently signed a drilling lease for his 140-acre farm just east of the market town of New Bedford, Ohio, said he feels comfortable with the process itself.

"I guess I feel they know what they're doing, and they'll take care of themselves," Troyer said.

Reason's Ron Bailey recently dispelled five lies about the fracking process. Adherence to Biblical principles was not addressed, though.