Of Renaissances and Improbable Comebacks, Comparing Coverage of Mark Sanford's Return to Politics to Anthony Weiner 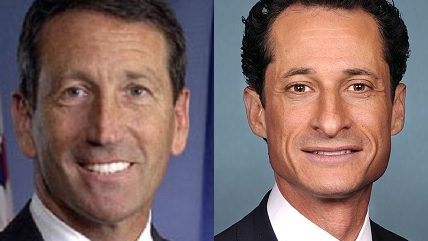 Anthony Weiner, who resigned from Congress over a scandal involving sending racy pictures to female followers on Twitter, has announced a bid to run for mayor of New York City in this year's election. He's not the first politician attempting a comeback this year. Mark Sanford ran in, and won, the special election to fill the Congressional seat vacated by Tim Scott in South Carolina earlier this year. It's a good opportunity to compare coverage of somewhat similar subjects.

Here's the New York Daily News on Mark Sanford, a politician in another part of the country:

Disgraced former South Carolina Gov. Mark Sanford is hoping that the campaign trail will pick up where the Appalachian one left off.

Two and a half years after revelations of an extramarital affair ended his political career, Sanford is poised to announce that he will seek an open seat in the U.S. House of Representatives, The Weekly Standard reported.

Nearly two years after he resigned from Congress because of a sexting scandal, Anthony Weiner is running for mayor…

The unconventional campaign launch culminates a comeback tour that began in early April with a magazine interview and continued with the posting of a policy booklet online filled with ideas for the next mayor.

Although the sexting scandal made Weiner a national punchline, he has the potential to be a force in the mayoral race.

Here's the AP on Sanford:

Former South Carolina Gov. Mark Sanford, whose political career was derailed four years ago because of his affair with an Argentine woman, is attempting an improbable comeback.

Once mentioned as a potential 2012 GOP presidential contender, the 52-year-old Republican announced Wednesday he will run for his old congressional seat in his home district along the South Carolina coast. Sanford, a penny-pinching conservative long before the tea party movement, said he is done apologizing for the affair and wants to restore "fiscal sanity" to Washington. He believes voters are ready to give him another shot in office…

But some have said the affair will be difficult for Sanford to shake. After all, he disappeared from the state for five days in 2009, telling his aides, who told the media, that he was hiking on the Appalachian Trail.

Here's the AP on Weiner:

Anthony Weiner's run for a renaissance is officially on.

The ex-congressman whose career imploded in a rash of raunchy tweets two years ago said in a YouTube video announcement late Tuesday that he's in the New York City mayoral race. He'd said last month he was considering it.

"I made some big mistakes and I know I let a lot of people down, but I also learned some tough lessons," he said in the video. "I'm running for mayor because I've been fighting for the middle class and those struggling to make it my entire life. And I hope I get a second chance."

A poll last month showed half of registered Democrats in the city wouldn't consider supporting Weiner, but had the former Congressman finishing second behind just City Council Speaker Christine Quinn in the crowded primary field.