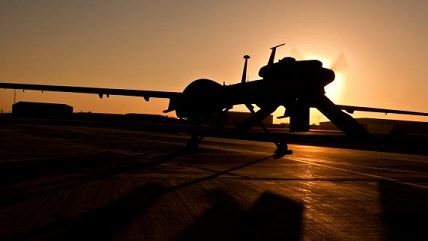 The U.S. drone campaign in places like Yemen is still technically secret. From Reuters:

At least four people were killed and a number of others wounded in a drone strike on a vehicle carrying suspected al Qaeda members in southern Yemen, a local official said on Saturday.

The official said the strike took place at dawn on Saturday on a road to the north of Jaar in Abyan Governorate, near Aden. He did not say who was behind the strike, but previous drone strikes have been carried out by the United States.

An alleged foiled terrorist plot by Al-Qaeda in Yemen reported by the AP last May is likely the story behind the DOJ's seizure of the media organization's phone records.

He said the target of the strike [in his hometown a week before the hearing] was known to many in the village and Yemeni officials could easily have arrested him.

"The drone strikes are the face of America to many Yemenis. If America is providing economic, social and humanitarian assistance to Yemen, the vast majority of the Yemeni people know nothing about it," he said.

"Everyone in Yemen, however, knows about America and its drones." Al-Muslimi said that allows the Yemen-based al Qaeda affiliate to "convince more individuals that America is at war with Yemen."

There have been at least 45 (and up to 92) drone strikes in Yemen since 2002 according to the Bureau of Investigative Journalism, all but one occurring since President Obama took office in 2009.