The rapper blames society for gun violence, ignores own influence 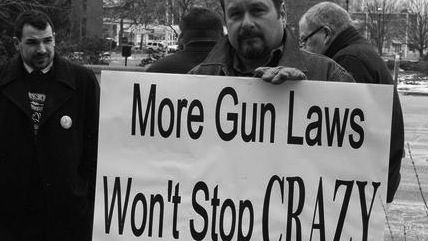 During an interview with Piers Morgan, rapper Snoop Lion (formerly Snoop Dogg), who in 2007 plead no contest to felony gun possession charges,  declared that "we are guilty as Americans of promoting the gun." The remark came during a discussion of his new song, "No Guns Allowed." Snoop Lion said he wrote the song "to help the the next person who was thinking about loading a gun and going to a school and shooting, maybe helping him put that gun down."

Shortly after a 2012 movie theater shooting in Aurora, Colorado, MSNBC's Martin Bashir asked Ice T why he was such a defender of the right to own guns:

Well I'll give up my guns when everybody else does, doesn't that make sense? I mean if there were guns here would you want to be the only person without one?

Asked whether he has a gun at home, Ice T replied, "Yeah, its legal in the United States, it's part of our Constitution. You know, the right to bear arms is because that's that last form of defense against tyranny — not to hunt, it's to protect yourself from the police."

In an interview with The Huffington Post, rapper Big Boi, who voted for Gary Johnson, was asked if he had "a position or a stance when it comes to gun rights":

Where I stand at is, on the Second Amendment where the right to bear arms is not just for fishing and hunting and things like that but it's the right of the American people to have a means of defense against a tyrannical government.

When asked if he would "support an assault weapons ban or if you think its totally legit for people to have weapons like that," he answered: "I think people can have whatever they want to as long as they are responsible."

Vera Soliman was a 2013 Reason intern.