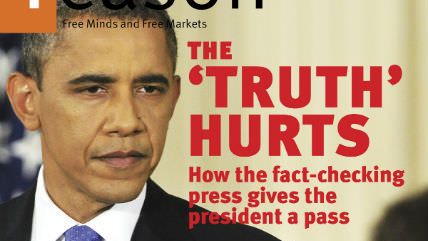 I was disappointed that Katherine Mangu-Ward's article "Your Vote Doesn't Count" (November) overlooked the argument that voting is coercion. Years ago, when I joined the Libertarian Party and signed the non-initiation of violence pledge, I realized that it meant I could never vote for the party's candidates. Voting is not just a personal preference poll: If my side wins, I'm voting to force all my neighbors to live by my rules.

I agree with Katherine Mangu-Ward's notion that one vote will not make a significant difference. But there are some other considerations. First, if fewer people vote, electoral power will be concentrated in the hands of an even smaller minority than it is now. Second, ballot access is a numbers game. Whereas winning an election is a plurality event, ballot access is a threshold event, regardless of who wins. Finally, we libertarians have an innate and fatal flaw: We are loath to assemble in large numbers to impose our will on others. The rhetoric of the Tampa and Charlotte party convention spectacles demonstrated that collectivists of the right and left have no such compunction and are eager to run our lives for us.

Corrections: In the November article "The Constancy of Crony Capitalism," Veronique de Rugy wrote that the energy firm First Solar received "$1 million in job training grants, and the Ohio Department of Energy extended another $5 million in loans." The article incorrectly attributed to First Solar some of the state subsidies other Ohio solar companies received. The company received only the $1 million in Energy Sector Training Grants in 2011, according to the Good Jobs First database, which tracks subsidies across states.

In "Libertarian(ish) Candidates," (November) Rep. Jeff Flake (R-Ariz.) is described as voting for the Troubled Assets Relief Program. He did not.

"People commonly perceive government as changes in policy rather than maintenance of programs. That's why you see appeals to keep government's 'hands off' Medicare. When narcotics prohibition is repealed, that too will be seen as a triumph of government action. Once a program is established, its problems are seen as endemic."

—reason.com commenter "Robert" in response to "The Empty Case for Big Government" (November)

"I'd say that some people on the left take the anti-war and other positions shared by Paul more seriously than other issues. Remember, we're talking about millions of people. However, that number is clearly even less significant than the number of libertarians located in the GOP, Libertarian Party, or elsewhere."

"Republicans tend to support the free market more. They also tend to support freedom of choice more. Democrats don't like school choice, food choice, private property. Even in areas of 'social' freedom, like gay marriage, they end up finding some way to assert control—like with the ban on gay therapy in California. That's not to say that Republicans are consistent in supporting freedom. But Democrats are pretty consistently against freedom."