The Politics of Dating

Lucy Steigerwald | From the December 2012 issue 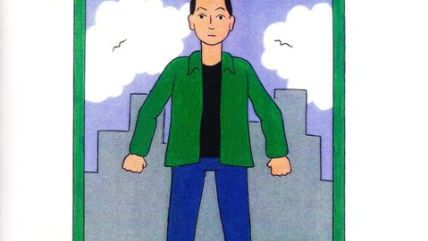 Nick Maandag's self-published comic book The Libertarian starts humorously enough. The cocky libertarian narrator stretches the truth a bit in order to hook up with a beautiful, feminist, vegan socialist he meets doing yoga in the park. Hilarity (naturally) ensues. Things quickly get tiresome, though. The cocksure libertarian kicks over a newspaper box when headlines report a minimum wage increase. The lefty gal goes to boring rallies and has a friend named Guevara who looks exactly like Marx, and is as long-winded too.

Unfortunately, Maandag has little to offer beyond these basic caricatures. The unpleasant people in The Libertarian don't do justice to the serious, high-stakes political views they represent. Sure, politics can make a dinner date awkward, but libertarianism—and even socialist leftist veganism—deserves subtler shades of gray than Maandag's comic offers. —Lucy Steigerwald

Lucy Steigerwald is a contributing editor at Antiwar.com and previously worked as an associate editor at Reason.