Charles Oliver | From the November 2012 issue 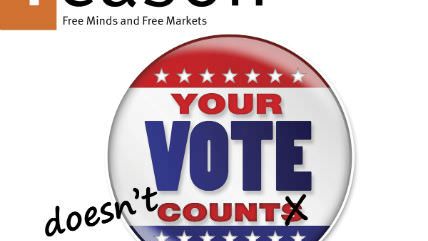 Lauren Grey has lived in the United States since she was 4. But she will have to leave this year when she turns 21. Her parents came to America on an E-2 visa to start a business. That visa can be renewed indefinitely, but it covers only individuals and their dependent children. When she turns 21, Grey will no longer be covered by it. Her family started the process of trying to get a green card for Grey nine years ago, but the federal government is still processing that request.

Erica Masters was asleep in her home in Columbia County, Georgia, when she awoke to find a strange man in her bedroom shouting at her. It was county code enforcement officer Jimmy Vowell, demanding that she sign a notice of a code violation for not mowing her lawn.

Connie Smith says she cried when she read the letter informing her she could no longer vote. It was the second time Smith, who is obviously very much alive, had been purged from Florida voter rolls because the Division of Elections believed she was dead. Officials say Smith keeps getting mixed up with a woman with a similar name and the same birth date who died several years ago.

Dina Frank, 7, has cerebral palsy and needs leg braces and crutches to walk. She therefore could not walk through the metal detector when her family tried to fly out of New York's John F. Kennedy International Airport on April 15. Instead, Transportation Security Administration agents searched her. Her parents say they warned agents that Dina is also developmentally disabled and frightened by the procedure, but the agents still handled her aggressively. After the agents searched Dina and allowed the family through security, a supervisor told them the agents had not followed proper procedure and forced the girl to be searched again, making the family miss their flight.

Parents of students at England's Gartocham Primary School were excited to learn that Alan Bell, the chief starter of the London Olympics, would be firing his starter pistol to kick off races at the school's annual sports day. Local health and safety officials were less excited than alarmed. They banned Bell from firing the pistol, saying it could frighten the children.

The Santa Monica, California, city council has voted to ban new tenants of multi-unit residential buildings from smoking inside their homes and to require current residents to declare their units smoking or nonsmoking.

Davenport, Iowa, residents Mack and Merla Covey said they were surprised to see strangers in their yard removing a teepee and other items. It turns out the strangers were city workers removing "debris" a neighbor had complained about. The Coveys say they used the teepee for spiritual ceremonies. Alderman Bill Boom said the city sent a notice to the Coveys instructing them to remove the items, but it was sent to the wrong address.