A Win for Arizona Immigrants

Calvin Thompson | From the October 2012 issue 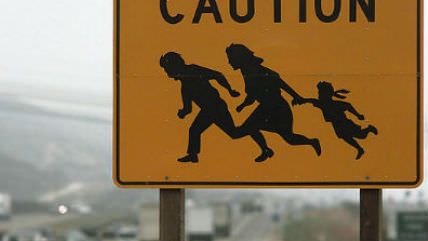 In the October 2008 reason, Kerry Howley described the detrimental effects of Arizona's increasingly strict immigration policies in "The One-Man Wall." Laws aimed at illegal-immigrant employees had led to labor shortages, especially in physical jobs such as construction, where noncitizens accounted for 20 percent of Arizona's work force. In 2007, Howley noted, "researchers estimated that a 15 percent reduction in immigrants in the construction sector would result in a loss of 56,000 full-time jobs (for both citizens and noncitizens) and $6.6 billion in output." The upshot? "When immigrants leave, they take jobs with them."

In April 2010, Arizona passed the Support Our Law Enforcement and Safe Neighborhoods Act (S.B. 1070), which made it a crime for illegal immigrants to hold or search for jobs, allowed state police to arrest people on suspicion of being in the country illegally, and required legal immigrants to carry registration documents at all times. It also required police to investigate the immigration status of people they encounter in the course of their work.

The resulting economic losses were substantial. The Center for American Progress reported that the state's tourism industry alone took a $250 billion hit and lost an estimated 2,761 jobs in the first year alone, due to boycotts by people who opposed the law.

After the law passed, the U.S. Department of Justice challenged it, arguing that it unconstitutionally usurped federal authority. In June the Supreme Court struck down three of S.B. 1070's four provisions, leaving only the requirement that police check the immigration status of detainees.

The ruling left open the possibility of further challenges to the law. "Detaining individuals solely to verify their immigration status," Justice Anthony Kennedy wrote for the majority, "would raise constitutional concerns," under the Fourth Amendment. Drawing a distinction that recalls 2005's Illinois v. Caballes decision about the use of drug-sniffing dogs, the court found nothing wrong with determining the immigration status of an already-detained individual, as long as this inquiry does not prolong the length of the detainment. Anything beyond that would count as an "unreasonable" search. "As a general rule," Kennedy noted, "it is not a crime for a removable alien to remain present in the United States."