Jacob Sullum | From the August/September 2011 issue 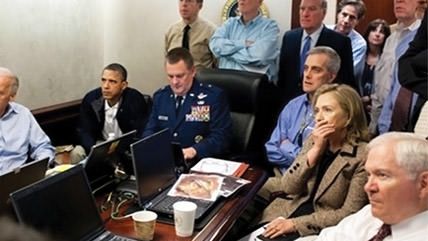 Shortly after the raid that killed Osama bin Laden, the White House released a photo showing, per the official caption, "President Barack Obama and Vice President Joe Biden, along with members of the national security team, receiv[ing] an update on the mission" in the Situation Room. The picture ran in many publications, including the Brooklyn-based Hasidic newspaper Di Tzeitung. But Di Tzeitung's version was missing two of the 13 officials: Secretary of State Hillary Clinton and Director for Counterterrorism Audrey Tomason. The gender-selective airbrushing, first reported by the website Failed Messiah, provoked widespread ridicule and charges of sexism.

In response, Di Tzeitung's editors argued that their critics had things backward. "Our editorial policies are guided by a Rabbinical Board, and because of laws of modesty, does not allow for the publishing of photos of women," they explained in a press release. "The readership of the Tzeitung believe that women should be appreciated for who they are and what they do, not for what they look like, and the Jewish laws of modesty are an expression of respect for women, not the opposite."

The editors did apologize for missing the fine print accompanying the photo, which said it "may not be manipulated in any way."