Shot by the Sheriff 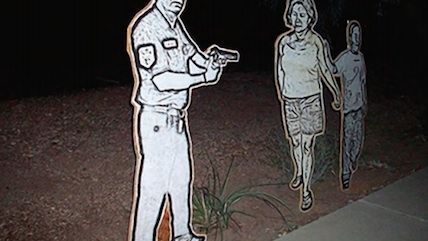 Immigrants have plenty of reasons to fear authority in Arizona. Border Patrol Agent Nicholas Corbett shot and killed an unarmed illegal immigrant at point-blank range in 2007 and remains on the force after two mistrials. The country's most draconian employee verification law turns bosses into immigration law enforcers. And Sheriff Joe Arpaio of Phoenix's Maricopa County has become both famous and infamous for stopping brown-skinned people at checkpoints and having the paperless deported.

A group of anonymous artists in Tucson has responded with lifesized cutouts depicting the border cops aiming their guns at bewildered immigrants. They placed these creations at intersections all over the city. Painting in eerie detail, the artists mixed and matched the cutouts to illustrate various types of conflict. In some spots, Arpaio stood with his legs spread, gun at the ready, opposite a supplicating suspect. In others, a cutout of an immigrant woman and her child roamed, unaware, near officers. With just a few black-and-white figures, the artists captured a wide range of border control interactions.

Asked about the spooky cardboard images which the city removed within a few days, Arpaio told KVOATV, "I will continue my fight against illegal immigration, and these people here in Arizona…are not going to deter me."