Nick Gillespie | From the May 2007 issue 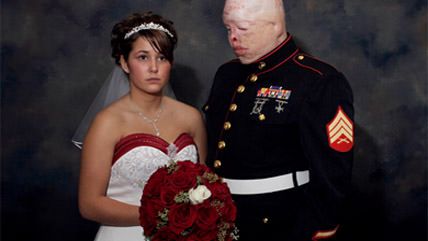 "Suppress it!" Gen. William Tecumseh Sherman reportedly told the Ohio State Fair in 1880, referring to his experience during the Civil War, the first American conflict to be heavily photographed. "You don't know the horrible aspects of war. I tell you, war is hell!"

Former Marine Sgt. Ty Ziegel knows the horrible aspects of war in a way few of us will ever have to endure. In a 2004 suicide bomber attack during his second tour of duty in Iraq, he was seriously wounded, losing an eye and suffering burns over much of his body. His injuries, including a fractured skull and an amputated arm, required 50 operations and 19 months of rehabilitation.

This image is from Ziegel's wedding day last October, when he married his longtime fiancée Renee Kline. Recently chosen for the 2007 World Press Photo Foundation Award, it was taken by Nina Berman, a New York–based photographer whose work, online at ninaberman.com, includes the photoessays ?Purple Hearts," studies of wounded Iraq war veterans, and "Under Taliban," scenes from the repressive former regime in Afghanistan.

In the Internet age, war is no less hell than it was in Sherman's day. But it is increasingly impossible to suppress its horrible aspects, or the scars that soldiers and their loved ones must learn to live with.

Nick Gillespie is editor-in-chief of reason.