Jesse Walker | From the December 2001 issue 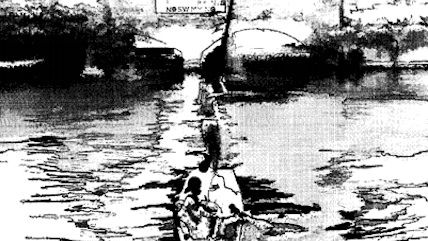 A tidal wave of debris rolls toward the camera. Suddenly, the screen goes completely black; the terrified cameraman whispers, "I hope I live, I hope I live." When the darkness clears, we're in an eerie, chaotic landscape, like a Sam Fuller war movie crossed with Night of the Living Dead.

The scene, of course, is Manhattan, September 11, 2001. The cameraman is Mark Heath, a doctor who rushed to the World Trade Center after the terrorist attacks, only to narrowly miss dying himself when one of the towers collapsed. Heath habitually brings a camera with him when responding to an emergency, to document the scene for future reference. That day, he captured the most staggering footage to emerge from the terror.

Amid the often awful television coverage of the September 11 atrocities—the soaring Muzak, gauzy montages, and newscaster clichés that threatened to trivialize the worst crime ever committed on U.S. soil—there was this gritty amateur footage, these harsh and immediate images. Heath's video quickly turned up on TV and the Web, along with many other sequences shot by non-professionals. If life, as The Onion argues, has begun to imitate a bad Jerry Bruckheimer movie, it is this far different, far more democratic sort of moving picture that captures the real horror of our world.