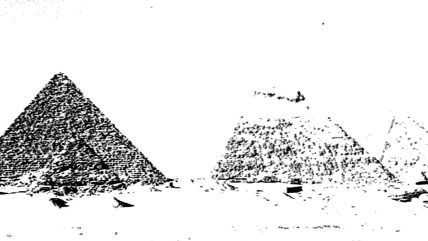 On New Year's Eve most people were worried about their ATMs; others, however, were focused on the Great Pyramid. According to certain British millennialists, former President George Bush would be conducting a Black Mass inside the great Giza structure, summoning evil forces at midnight on behalf of an "Illuminati elite" of human-reptile hybrids. Bush obviously has a more colorful image overseas than he does here.

Egypt halted plans to top the pyramid with a two-story gold capstone intended to catch the first rays of the new year's sun. Why? Pyramid capping, charged critics who cited the back of the U.S. dollar bill, is a "Masonic" ritual. Since Freemasonry is just a front for international Zionism, claimed the critics, the year began capless in Giza.

A re-capped pyramid was prophesied by "sleeping prophet" Edgar Cayce, whose sonar-wielding followers claim to have located a "secret chamber" beneath the paws of the neighboring Sphinx. Meanwhile, archeologists are excavating the nearby tombs of Giza's pyramid builders; the contents may solve some lingering mysteries. There's evidence that construction involved an earthen ramp, for example, rather than interstellar anti-gravity devices.

That may disappoint some, as, no doubt, did the cancellation of Bush's reptilian ceremony. But there's always next year, when the millennium really begins.