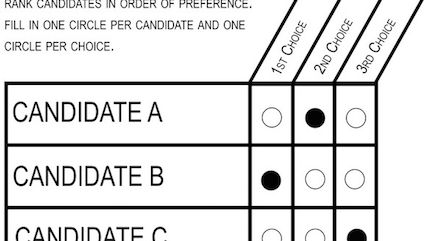 As political pundits who missed the Donald Trump phenomenon grapple with Hillary Clinton's loss in the presidential election, some have lashed out at third-party voters, whom they blame for costing Clinton victories in the key swing states of Michigan, Wisconsin, and Pennsylvania.

Putting aside the problems with this argument—the most obvious of which is that voters who picked Libertarian Gary Johnson or the Green Party's Jill Stein weren't guaranteed to unanimously break for Clinton had they been deprived of another choice—the "spoiler effect" is one that regularly plagues third parties in American elections. Voters often feel compelled to choose the "lesser of two evils," a phrase never more apt than in this year when Americans disliked both Clinton and Trump at record-high levels.

But what if a simple change to the way we vote allowed Americans to vote their conscience and choose the lesser of two evils? And what if this change could improve the quality of the candidates and elevate the level of discourse?

Our guest on today's episode of the Reason Podcast argues just that.

Richard Woodbury is the chair of the Committee for Ranked Choice Voting. Ranked choice voting, wherein voters are allowed to rank candidates from best to worst rather than voting for only one just passed in the state of Maine by voter ballot initiative, making it the first state to adopt this electoral reform. Woodbury served as an Independent in the Maine House and Senate for five terms, during which he introduced ranked choice voting legislation, though it never passed during his tenure. By trade, he's an economist who works for the National Bureau of Economic Research.

On today's episode, Reason TV's Zach Weissmueller spoke with Woodbury about the mechanics of ranked choice voting, how and why it passed in Maine, why third party candidates Gary Johnson and Jill Stein endorsed the ballot measure, and how wider implementation of such a reform could transform American politics for the better.