The Scariest Predictions in the New U.N. Climate Report Are Also the Most Unlikely

The Intergovernmental Panel of Climate Change issues its Sixth Assessment Report on the global climate.

"It is unequivocal that human influence has warmed the atmosphere, ocean and land," declares the Intergovernmental Panel on Climate Change (IPCC) in its new Sixth Assessment Report. "Widespread and rapid changes in the atmosphere, ocean, cryosphere and biosphere have occurred." The climate scientists who assembled and curated the data inform us that the average temperature of the globe is now 1.1°C (about 2°F) higher than the average temperature of the 1850–1900 period.

The recent rise in temperatures is mainly due to increases in atmospheric concentrations of greenhouse gases, chiefly carbon dioxide emitted from burning fossil fuels. The amount of carbon dioxide in the atmosphere has increased from the pre-industrial level of around 280 parts per million (ppm) to more than 410 ppm.

As the new report notes, the evidence has significantly strengthened since 2013, when the IPCC's last assessment appeared, that human-induced climate change is largely responsible for observed changes in heat waves, heavy precipitation, droughts, tropical cyclones, and other forms of extreme weather. Global sea level has increased by about 8 inches since 1900. But it has been accelerating in recent years due to thermal expansion and melting glaciers and ice sheets, rising faster since 1900 than over any preceding century in at least the last 3,000 years.

How much hotter will it get in the future? The IPCC report outlines five different "shared socioeconomic pathways" (SSPs) that incorporate various assumptions about economic growth, population growth, and just how much greenhouse gas humanity will emit over the rest of the century. The good news is that the two worst-case SSPs are totally implausible, so humanity is probably not looking at temperature increases of 3.5 °C to 4.5 °C by 2101. (Keep in mind that the temperature difference from the depths of the last ice age to today is around 6°C—and that change took place over millennia, not a century.)

Why are they implausible? Consider that the worst-case pathway projects that humanity will, among other things, be burning about five times more coal and annually emitting three times more greenhouse gases than we do today. (Global coal production peaked in 2013, so that would be quite a reversal.) The second-most-dire pathway projects that humanity will annually emit more than double the amounts of greenhouses gases being emitted currently. 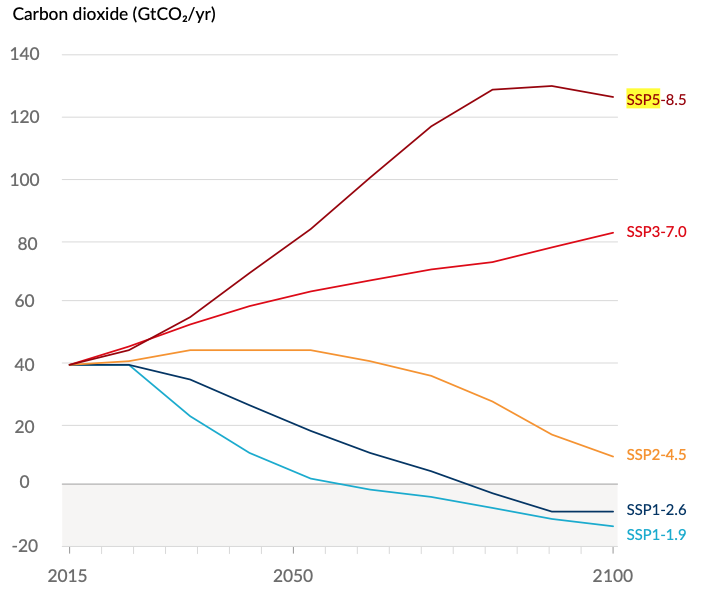 Using those data, Breakthrough Institute climate and energy director Zeke Hausfather and CICERO Center for International Climate Research director Glen Peters published a Nature article last year highlighting the implausibility of the IPCC's scariest scenarios. Those SSPs "should be clearly labelled as unlikely worst cases rather than as business as usual," they concluded. 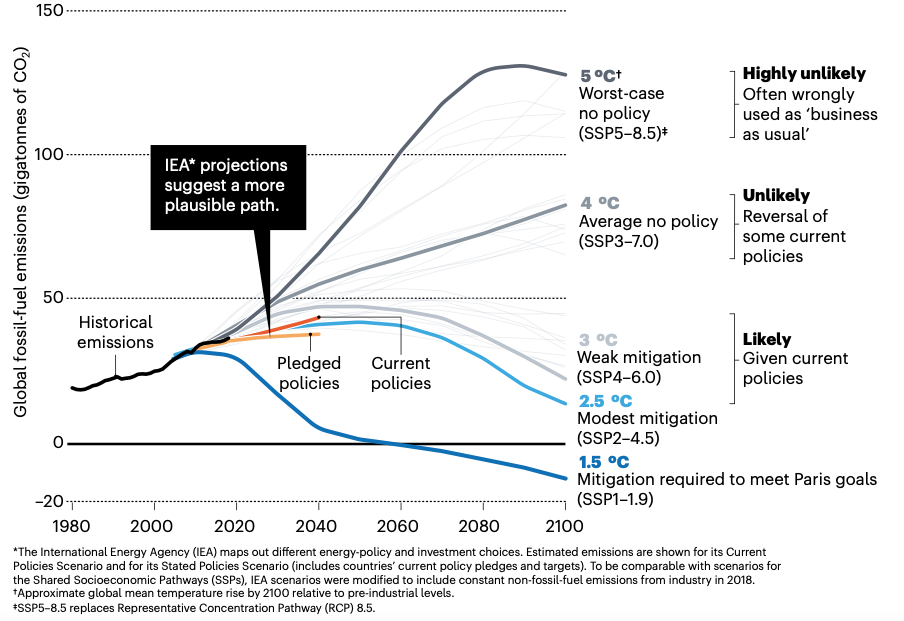 University of Colorado environmental researchers Roger Pielke Jr. and Matthew Burgess, along with the University of British Columbia's Justin Ritchie, analyzed the IPCC's emissions scenarios more recently. In a preprint of their results, they find that 71 percent of the most plausible emissions scenarios "project between 2°C and 3°C of warming by 2100, with a median of 2.2°C." 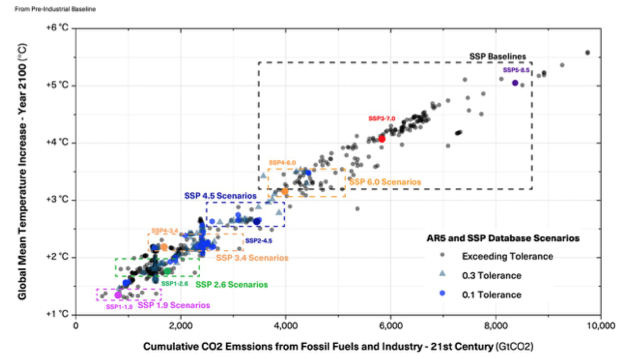 Those scenarios still indicate that the world is off track from limiting 21st century warming to the Paris climate change agreement's goal of around 1.5°C.

The table below shows projected mean global average temperatures under each of the IPCC's five scenarios. The intermediate pathway—the one dubbed SSP2-4.5—falls close to the range of those identified by Pielke and his colleagues.

In "How Climate Scenarios Lost Touch With Reality," a paper published last month in Issues in Science and Technology, Pielke and Ritchie persuasively argue that "the emissions scenarios of today's climate science are delivering distorted pictures that compromise both understanding and well-informed policymaking." They add, "Until the climate science community addresses this fundamental problem of scientific integrity, its potential to contribute to pragmatic solutions for the vexing, extraordinarily difficult challenge of climate change will be unnecessarily compromised."

Unabated man-made climate change would likely become a significant problem for humanity by the end of this century. But the more plausible emissions scenarios suggest it is eminently possible to grow the world's economy while keeping global temperatures below catastrophic thresholds, by gradually transitioning from fossil fuels.