The National Flood Insurance Program (NFIP) run by the Federal Emergency Management Agency (FEMA) is $20.5 billion in the hole, even after Congress canceled $16 billion in debt in 2017. This financial shortfall is largely because the program does not charge nearly enough in premiums to pay for the flood damage on the properties it insures. For decades, taxpayer bailouts of the NFIP have enabled people to live and build in flood-prone areas instead of bearing the risks themselves.

In order to address this problem, the NFIP has been working on its new Risk Rating 2.0 initiative, with the aim of charging premiums that more accurately reflect the unique flooding risks of individual properties. The agency had planned to release its updated rates later this year.

Not so fast, says Senate Majority Leader Chuck Schumer (D–N.Y.). The senator's office recently informed FEMA that adjusted premiums could have a "severe impact" on homeowners, and urged Congress and the Biden administration to work together toward "affordable protection" for flood-prone communities. Schumer raised a similar alarm shortly after the changes were first announced: "How can we ram through a national flood insurance plan that could unfairly put a bull's-eye on the backs of Long Island and New York homeowners without more consultation?" he asked at an April 2019 press conference. "Halt. Stop. Stop this plan."

Actually, lots of beachfront dwellers in New York (and elsewhere) have been "unfairly" taking advantage of taxpayers. A recent study by the nonprofit research group First Street Foundation calculates that the average estimated annual loss for each of the 4.3 million properties most at risk of flooding is $4,419, whereas NFIP premiums average $981. In other words, their flood insurance premiums would have to increase 4.5 times over their current rates to fairly cover the flooding risks to these properties.

Forbes reports that for the 1.5 million properties located in FEMA's Special Flood Hazard Areas (SFHA), flood insurance premiums could rise to almost $8,000 per year. Below is a First Street Foundation map showing the average expected loss per property versus the average premiums paid in New York's counties. In New York state, the expected annual loss for properties in SFHAs is $5,126, while premiums average $1,860 per year. One of the biggest disparities between risks and payments can be found in Northport on Long Island, where the spread is $9,362 in losses versus $685 in premiums netting to a difference of 1,266.5 percent. 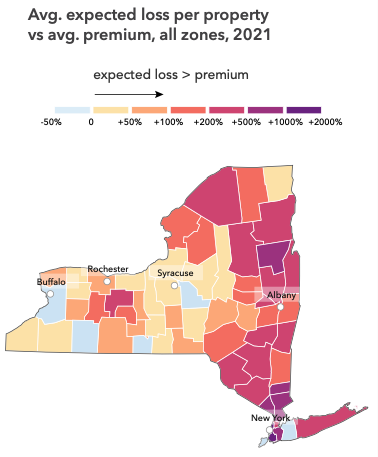 In a fascinating 2016 Stanford Law Review article, legal scholars Omri Ben-Shahar and Kyle D. Logue argue that insurance can serve "as a form of private regulation of safety—a contractual device controlling and incentivizing behavior prior to the occurrence of losses." They point out that as a result of "direct government provision of subsidized insurance, private markets no longer generate price signals regarding the cost of living in severe-weather regions." Suppressing the true cost of insurance encourages "private parties to (rationally) assume excessive risk, and dump the cost of living in the path of storms on others. Indeed, much of the development of storm-stricken coastal areas is due to insurance subsidies, and would likely not have happened at the same magnitude otherwise."

Living on the beach on Long Island (or anywhere else) is surely lovely, but Schumer should recognize that the rest of us should not be subsidizing his constituents' choice to dwell in flood-prone zones.