Rep. Peter Meijer, on Impeachment Vote: 'There's an Assumption That People Will Try To Kill Us'

As Mitch McConnell and Liz Cheney break for impeachment, the freshman GOP congressman who succeeded Justin Amash says that Republicans who are "going to vote our conscience tomorrow" expect to be assaulted. 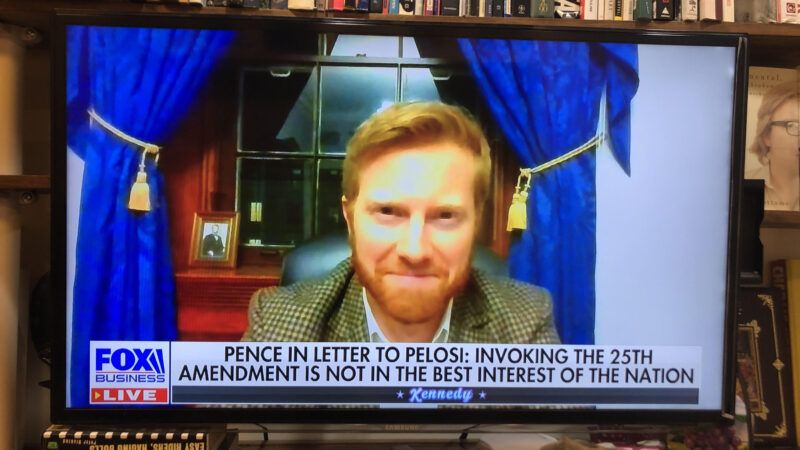 Citing "people familiar with his thinking," The New York Times reported Tuesday afternoon that Senate Majority Leader Mitch McConnell (R–Ky.) "has told associates that he believes President Donald Trump committed impeachable offenses and that he is pleased that Democrats are moving to impeach him, believing that it will make it easier to purge him from the party."

This startling development on the eve of Wednesday's planned House impeachment vote was soon followed by two others: Rep. Liz Cheney (R–Wy.), the third-ranked Republican in the House, announced in a blunt statement that she will vote to impeach. "None of this would have happened without the President….There has never been a greater betrayal by a President of the United States of his office and his oath to the Constitution." Vice President Mike Pence, meanwhile, dismissed the House's attempt to have him invoke the 25th Amendment to remove Trump from office.

At least two other Republicans, Reps. Adam Kinzinger (Ill.) and John Katko (N.Y.) have joined Cheney and the House Democrats in favor of impeachment. A third who has said he's "strongly considering" it is Rep. Peter Meijer (R–Mich.), the freshman successor to Justin Amash.

Meijer, who attracted attention with his statements in a Reason interview published Friday (and reiterated in a Detroit News op-ed Saturday) that some of his GOP colleagues "knew in their heart of hearts that they should've voted to certify [the presidential election], but some had legitimate concerns about the safety of their families," made additional troubling statements on Fox Business Network's Kennedy this evening.

The Afghanistan and Iraq veteran, who favors a censure of the president but is officially undecided on impeachment, said he wished he could bring a gun to work, and then explained why.

Washington remains on the kind of high violence alert not seen since September 2001. President Trump today warned that impeachment would bring "tremendous danger" to the country, causing "tremendous anger." Meanwhile, the Justice Department and FBI said Tuesday that the new information forthcoming in investigations into the Capitol riots will shock the conscience.