"I pulled the kids and I'm homeschooling." 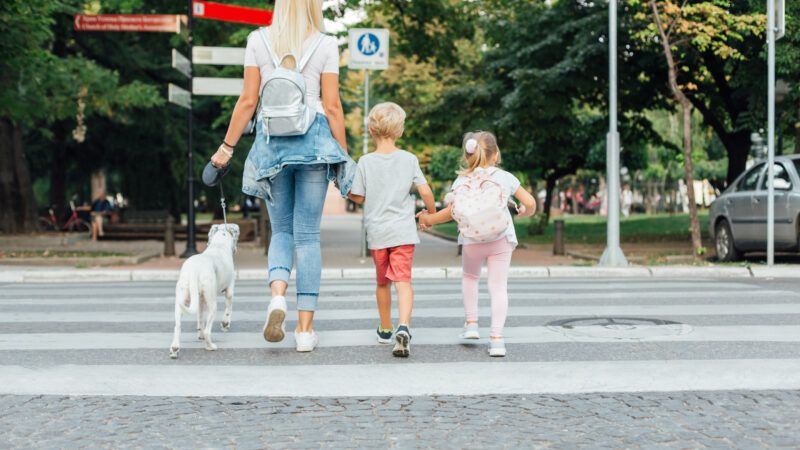 You may recall the saga of the South Carolina mom who granted her kids—ages 9, 10, and 11—permission to walk the mile home together, without her.

School officials refused to let them to do this, on the grounds that a nearby intersection (with walk/don't walk signals) is too dangerous. This particular mom's kids happen to cross it at other times, unaccompanied, on their way to and from extracurriculars.

Has the school never heard of crossing guards? No matter. The children were required to be picked up by an approved adult. If not, they would have to take the school bus.

The mom, Jessie Thompson, didn't understand why it was up to the school to decide what her kids did after leaving school property. She offered to sign a liability waiver. This did not move the needle and the issue came to a head this past week.

I'll let Thompson take it from here. She's a surgical neurophysiologist, which means that she monitors a patient's nervous system during surgery. In an email with the subject line, "It's Over!" she wrote:

Just wanted to give you the final update.

I pulled the kids and I'm homeschooling.

The school was making me go into the office to show my ID at dismissal.  That worked for a time, until one day I forgot my ID.

When the secretary (who has known me for three years) said to me that she couldn't let me take the kids, I responded, "Just try to keep my kids from me" and then told my kids to exit the office.

My kids stood there, not knowing whether to listen to their mother or the secretary.  I had to ask them twice to exit. That was the day I stole my kids from their school, because after all, the school has the primary authority and I, the parent, am only so lucky to be given access to the kids when the school allows.

The next day, my kids were all held in their classrooms until I showed my ID (to the same woman who has known me for three years), at which time she called each classroom individually to tell the teachers they could release the kids.

The following day, I refused to show my ID until they dismissed my kids, per the usual dismissal routine, and did not hold my kids hostage in order to play games with me.

They called the police.

I had about a 30-40 minute interaction with two police officers, almost being arrested at one point. I was successful that day, as the police instructed the office secretary to dismiss my kids and then I showed my ID before leaving with them.

The officers informed me that if I did the same thing the following day that I would be arrested.

And so for the next two weeks, the school held my kids in their classrooms, hostage, until I, their mother, showed my ID to a secretary who has a three-year history with me.

My attorney was unable to have that stop and I just couldn't take it anymore.

So my homeschool journey begins.

Thanks for your help. It was quite a ride.

I do wish her luck. Her case has me thinking about Voltaire's observation that "those who can make you believe absurdities, can make you commit atrocities."

The absurdity here is not just that kids can't cross a street by themselves. It's also that the mom picking up her kids must show proof that she is the person everyone knows she is. As if the ID is more reliable than her own kids saying, "Hi mom!"

And the cruelty is that those rules allow the secretary—and cops—to torment the mom while claiming this is just for safety's sake.