The president's rhetoric and his campaign's actions are corrosive, but even the most powerful man on the planet can't control America's diffuse election system. 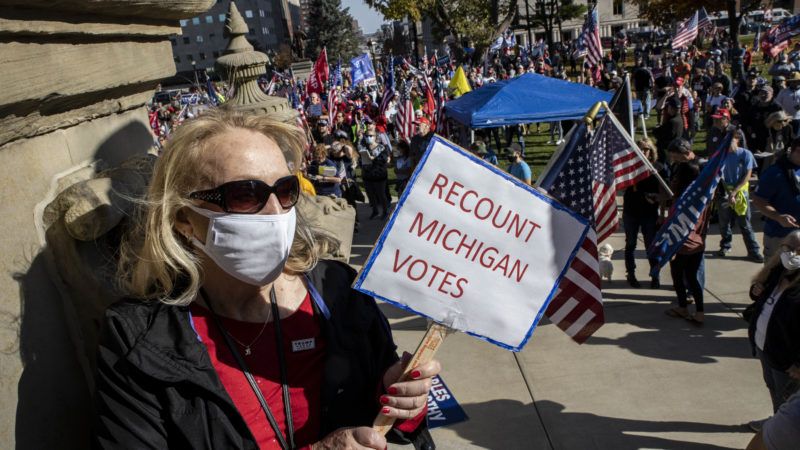 President Donald Trump's longshot efforts at getting courts to overturn the results of the presidential election in key states are ending in near-unanimous failure. Now, his campaign is turning to a new, extreme tactic to prevent election results from being certified—one that is also nearly certain to fail but that is testing the resiliency of the American democratic system in new ways.

On Tuesday, the two Republican members of the board of elections in Wayne County, Michigan, blocked the certification of the election results there. The officials cited unspecified "irregularities" with the vote count in the county, which includes the heavily Democratic city of Detroit. The maneuver quickly earned praise from the head of the Michigan Republican Party and an approving tweet from Trump—indicators that suggest this was not a rogue action, but a carefully planned one.

At stake are Michigan's 16 electoral votes. President-elect Joe Biden won the state by about 140,000 votes, but removing Wayne County (where Biden won by over 300,000 votes) from the statewide tally would flip the state's electors to Trump.

What happened in Michigan was part of an emerging strategy within Trump's campaign legal team to try to block the certification of the election in key states, The Washington Post's Robert Costa reported Tuesday evening. The ultimate goal is to throw the election into the U.S. House of Representatives. It is a little unclear how that would actually help Trump in the long run. The Democratic-controlled House would be expected to certify slates of electors from Democratic governors in the key states of Michigan, Pennsylvania, and Wisconsin, notes Rick Hasen, a professor of political science at the University of California, Irvine.

For now, we don't have to worry about gaming out those scenarios because the Michigan effort failed. Hours after they'd initially refused to certify the vote, the Republican members of the Wayne County elections board reversed their decision in the face of public outcry and pressure from some fellow Republicans in the state government

But that doesn't mean there won't be similar attempts made in other states. In Pennsylvania, for example, Trump-aligned Republicans have been putting pressure on state officials to block certification of the results. Pennsylvania Senate Majority Leader Jake Corman (R–Centre County) wrote an op-ed in October pledging not to take such an unorthodox step in the wake of a contested election, but a breakaway faction of Republican state lawmakers is calling for the state to postpone certifying the results until a special audit of the election can be finished.

As in Michigan, this seems to be Trump's last gasp attempt at overturning the results. Biden leads in Pennsylvania by more than 80,000 votes. Meanwhile, the Pennsylvania Supreme Court on Tuesday rebuked the Trump campaign's allegations that observers were not allowed near vote-counting stations in Philadelphia, dealing a serious blow to one of the few Trump campaign legal efforts that hadn't been immediately defeated in lower courts.

What to make of all this? Trump's campaign seems to have made little headway in convincing enough Republicans to back a half-baked plan to toss the election into Congress—and, remember, they'd have to pull off this scheme in multiple states to deny Biden the presidency. It has always been and remains a serious long shot.

"I, frankly, thought they would surveil the landscape and decide this wasn't worth trying," says Walter Olson, a senior fellow for constitutional studies at the Cato Institute. Last week, Olson outlined the many obstacles standing between Trump's campaign and the goal of getting states to reject the apparent will of the voters. In an interview on Wednesday, Olson said he remains fairly confident that this effort will fail.

"White House had made clear they are up for this and they are willing to encourage it," he says, but "as with the litigation, the motive may not be directly to win so much as managing opinion among their base, keep the balls in the air, keep the uncertainty going."

Even if Trump fails, this prolonged attack on the fundamental democratic process is potentially corrosive. If the simple, routine process of certifying election results becomes another partisan game, the outcomes of future elections are likely to be similarly fraught even when there is no evidence of fraud. Could a candidate with broader support within his or her own party succeed where Trump apparently failed in Michigan this week?

Olson offers a more optimistic take. He says the past two weeks have demonstrated the remarkable resilience of the American electoral system—a resilience rooted in federalism and the diffusion of power. A few kooky officials might be able to hold up vote-counting in a few places, but the system contains enough legal and legislative checks and balances to prevent such action from succeeding.

"We are so lucky that elections have never been federalized," he tells Reason. "No one in Washington can give orders to fire local election board officials."

On Tuesday, Trump fired Christopher Krebs, director of the Cybersecurity and Infrastructure Security Agency at the Department of Homeland Security. As one of the top officials charged with overseeing the cybersecurity element of federal elections, Krebs had publically spoken out against Trump's claims of fraud and malfeasance.

But when it comes to what's happening on the ground in Wayne County, Michigan, and Harrisburg, Pennsylvania, even the most powerful man on the planet is relatively powerless to control the process of counting and certifying votes. Trump can rage and cheer on Twitter, but he can't appoint his own loyalists to control the election results—and Americans should trust the system to get it right in the end.