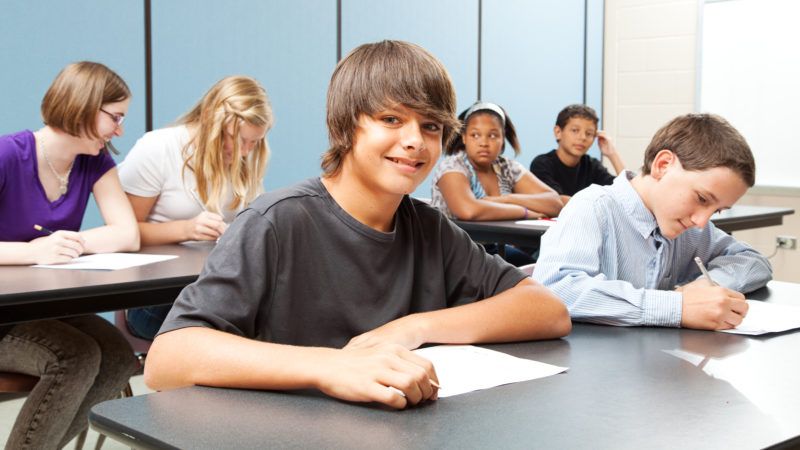 "This is part of our honest reckoning as a school district," San Diego Unified School District Vice President Richard Barrera told a local NBC affiliate. "If we're actually going to be an anti-racist school district, we have to confront practices like this that have gone on for years and years."

District officials evidently believe that the practice of grading students based on their average score is racist, and that an active effort to dismantle racism necessitates a learning environment free of the pressure to turn in assignments on time. As evidence for the urgency of these changes, the district released data showing that minority students received more Ds and Fs than white students: Just 7 percent of whites received failing grades, as opposed to 23 percent of Native Americans, 23 percent of Hispanics, and 20 percent of black students.

Under the new system, students will not be penalized for failing to complete assignments, and teachers will give them extra opportunities to demonstrate mastery of subjects. The grades they receive upon completion of a course will no longer reflect their average test and assignment scores. "Common grading practices such as averaging a student's grade over time can disadvantage students who started the year behind grade level and can discredit the progress a student has made, experts have said," noted The San Diego Union Tribune.

The new approach—which is rather confusingly written—still includes letter grades, but these will reflect student's "mastery" of the subject rather than their completion of homework, quizzes, and tests. What constitutes mastery is left unexplained. Grades "shall not be influenced by behavior or factors that directly measure students' knowledge and skills in the content area," which sounds like a recipe for highly subjective grading. And a great deal of leniency will now be given to students who don't do the work for a course, including those who don't show up at all: Attendance can no longer be a factor in grading.

In any case, ending these kinds of grades doesn't actually eliminate the underlying inequities that produced the disparate Fs. It may actually cover those inequities up: Given that grades are a tool for evaluating students' progress, the district is essentially announcing that it will no longer gather as much evidence about the negative social phenomena it would probably like to address. Better grades do not mean students will suddenly have a better grasp of the material. They certainly won't be better prepared for college (where traditional grades are very much still a thing).

Indeed, this comes perilously close to addressing poverty by no longer tallying the number of homeless people—or, to use a timely example, President Donald Trump's frustration that increasing COVID-19 testing will make the epidemic look worse. Coronavirus cases exist even if they go undetected; similarly, minority students who are falling behind their classmates will be falling behind even if their teachers aren't giving them Fs.

Eliminating grades and standardized testing has become something of a crusade for California progressives. California's public universities, for instance, announced earlier this year that they would no longer require applicants to take either the SAT, a measure on which white students have historically outperformed others. But this elides a serious problem for minority students: Other admissions criteria—such as legacy considerations and extracurricular activities—favor privileged applicants even more dramatically than grades and tests do. The wealthiest (and usually whitest) students have better access to résumé-padding activities; yes, they can also hire tutors and take test prep courses, but there's only so much extra value to be extracted from these things.

At present, San Diego schools are only open for a handful of special-needs students. What district kids need most of all is probably a return to normalcy, as soon as possible. An experimental system that eliminates year-end letter grades seems like an especially bad idea for the current moment.