Why are LGBT leaders letting the antigay senator frame polyamory as something bad and wrong? 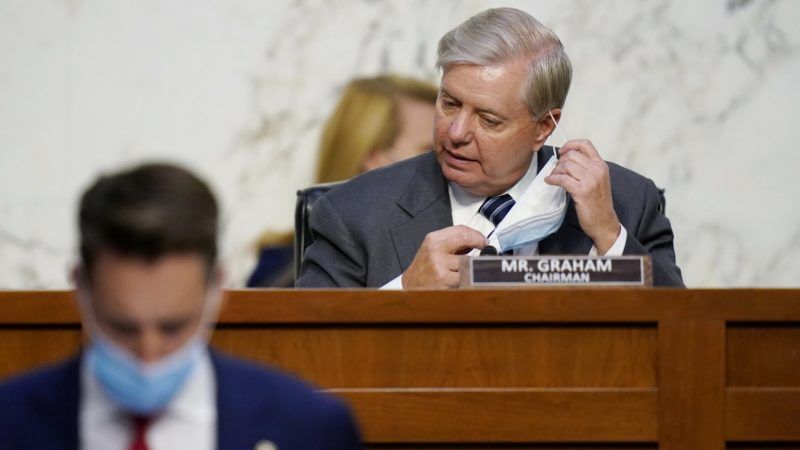 During this morning's questioning of Supreme Court nominee Amy Coney Barrett, Sen. Lindsey Graham (R–S.C.) asked Barrett whether there was a constitutional right to polygamy.

Barrett didn't answer because, she explained, "it's an issue that somebody might litigate before the court at some point." Graham wasn't truly trying to pin her down on polygamy. He was actually bringing up Obergefell v. Hodges, the Supreme Court decision from 2015 that mandated the states and the federal government recognize same-sex marriages.

Graham brought up Obergefell because he wanted to discuss how likely it might be that the Supreme Court may reconsider the ruling. Just last week, Justice Clarence Thomas, joined by Justice Samuel Alito, wrote a statement calling on the Supreme Court to take another look at Obergefell to make sure that the court properly protected the right of people to express religious objections to gay marriage.

That's also not what Graham is after here. He was getting Barrett on the record explaining the circumstances by which the court would revisit Obergefell. He is pointing out that reliance on the decision to determine other cases might prompt the Court to reconsider Obergefell (or Roe v. Wade, or other Supreme Court precedents) if the Court believes that the case was wrongly decided. Barrett agreed that's how the Court would work, though to be clear, she did not say or agree that Obergefell was decided "wrongly."

Graham, though, has a bit of an obsession with insisting that same-sex marriage recognition may eventually open the door for legal recognition of polygamous marriages. He previously asked Loretta Lynch during her hearings to be confirmed as attorney general under President Barack Obama what the difference was between legally recognizing same-sex marriage and legally recognizing polygamous marriage.

This morning, Graham's line of questioning has produced outrage in LGBT quarters that comparing gay marriage equality to polygamy is absurd and homophobic. Here's the clip of the exchange along with framing by LGBT law nonprofit Lambda Legal that the comparison is uncalled for:

Can't believe we have to say this but we'd like to remind everyone that marriage equality ≠ polygamy.#SCOTUSHearings pic.twitter.com/f5kO34GCv0

Here's a question though: Why are these LGBT or LGBT-friendly voices essentially agreeing with Graham that legal recognition of polygamous relationships is something ultimately bad and unwanted? The Obergefell ruling does, in fact, include a very lengthy analysis and recognition that our country's legal and social framework for marriage is ever-evolving. Here's a paragraph from the ruling:

The history of marriage is one of both continuity and change. Changes, such as the decline of arranged marriages and the abandonment of the law of coverture, have worked deep transformations in the structure of marriage, affecting aspects of marriage once viewed as essential. These new insights have strengthened, not weakened, the institution. Changed understandings of marriage are characteristic of a Nation where new dimensions of freedom become apparent to new generations.

The decision makes it clear that the court believes "The right to marry is a fundamental right inherent in the liberty of the person," and while the ruling itself is entirely focused on couples, there is nothing about the ruling that suggests its logic wouldn't apply to polygamous relationships, which Chief Justice John Roberts noted in his dissent.

So Graham's fears actually do have a foundation in the Obergefell ruling, which states that our country's concept of marriage evolves over time. But why are people treating Graham's framing as though it's something we should all be afraid of and resist? At one point, the idea that the government would recognize same-sex marriage was absurd. Then it was something to organize and fight against. And now, for most Americans, it's uncontroversial.

Organizations like Lambda Legal can and should oppose Graham's fearmongering about the Obergefell decision, but they should also consider whether they are themselves embracing a stereotype that polygamous relationships are or should be treated illegitimately under the law. There are LGBT people who also pursue them, after all, not just straight men looking to control women.