Ricky Dale Harrington is polling at 38 percent in a two-way race against one of the leading voices of the GOP's ascendant authoritarian nationalism. 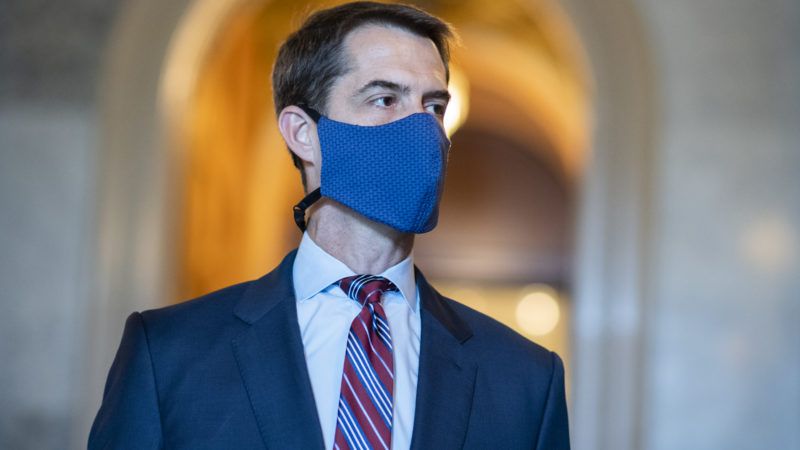 Sen. Tom Cotton (R–Ark.) is ducking a chance to debate his Libertarian challenger, even as a new poll shows the race tightening in the final weeks of what could be a rough election season for Republicans.

The debate, scheduled to be broadcast by Arkansas' PBS station on Wednesday night, will take place even without Cotton's participation. That means it will basically be an hour-long opportunity for Ricky Dale Harrington, Jr., to speak directly to the voters who will decide next month whether Cotton deserves another six years in the Senate.

#Election2020 In Arkansas' US Senate race there are 2 candidates @SenTomCotton (R) @RickyForSenate (L). They have a debate this Wednesday though Sen Cotton declined the invitation. I'm one of the panelists asking questions. The debate will go on! Watch 7-8pm on @ArkansasPBS pic.twitter.com/uY7ZtzlUZL

Cotton, who has emerged in recent years as one of the loudest voices in the GOP's ascendant authoritarian nationalist wing, appeared to be heading for an easy reelection bid when the only Democrat to enter the race dropped out late last year.

Enter Harrington, a 34-year-old prison chaplain running a campaign that gives voters about as stark a choice as they are likely to find in any two-way contest this year. Where Cotton has claimed that America has an "under-incarceration problem" and called for deploying more heavy-handed police tactics against protesters, Harrington wants to reduce mandatory minimums and demilitarize the police. That contrast would provide fertile ground for serious debate between the two men—if Cotton would agree to show up.

Even before this week's debate, Harrington has made a splash. According to a poll released last week by American Research Group (a polling firm that FiveThirtyEight grades well), Cotton leads 49 percent to 38 percent.

That's a comfortable enough lead—and every professional prognosticator has the race listed as a "safe" Republican win, even as the tide has turned against the GOP in the presidential race and some key Senate battlegrounds. Still, Cotton is polling at less than 50 percent in a two-way race, and 13 percent of voters say they remain undecided.

This week's non-debate is an opportunity for Harrington to appeal to those undecided voters. Failing to show up means Cotton stands to gain nothing.

"Candidates who duck debates tend to lose," says Joe Bishop-Henchman, chairman of the Libertarian Party. He says the recent polling shows that Harrington is gaining momentum in the race. "I'm glad PBS is letting him make his case."

When Cotton rejected the invitation to the debate, his campaign released a statement saying he was "spending time on the campaign trail when the Senate is in recess, and looks forward to making his case to Arkansans across our state before this November's election."

What Cotton won't do, apparently, is go head-to-head with a challenger that nearly four out of 10 Arkansans say they support.