Pence claims Obamacare was a "disaster" that Americans "remember." It's still very much on the books. 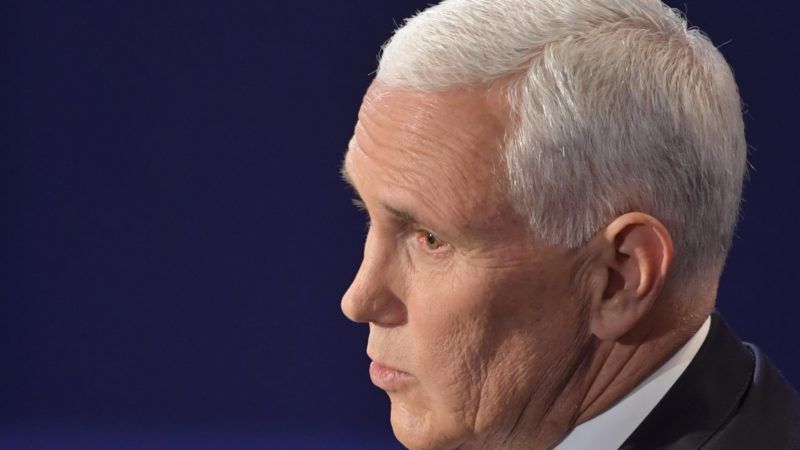 Having failed to repeal and replace Obamacare, the Trump administration appears to have settled on a different plan: pretend it's already gone.

During last night's vice presidential debate, Republican incumbent Mike Pence responded to the charge that the administration was "trying to get rid of the Affordable Care Act, which means that you will lose protections if you have preexisting conditions," by saying that he hoped he would have the chance to talk about health care, "because Obamacare was a disaster, and the American people remember it well."

The choice of words is telling. Obamacare was a disaster. Americans remember it well. Without explicitly saying that the health law has been repealed, Pence was speaking as if Obamacare was already gone.

That is far from true. Although Obamacare has been altered in various ways over the years by the Supreme Court, Congress, and the executive branch, the law's major components remain. The Medicaid expansion, which accounts for approximately half the cost of the law, has grown as more states have adopted it. The subsidies and regulations governing individual market health insurance remain alive. Many of the taxes and fees imposed by the law are still on the books. The "disaster" Pence spoke of in the past tense is a present reality.

The implication that it has been consigned to history was probably not an accident. For years, President Donald Trump has spoken of Obamacare as something that exists mainly in the past rather than a law that remains on the books. As early as 2017—following the passage of the Tax Cuts and Jobs Act, which set the health law's individual mandate tax penalty to zero—Trump claimed to have "essentially repealed Obamacare." During the first presidential debate, Trump responded to a question about his nonexistent but oft-promised plan to replace the law by saying, "I got rid of the individual mandate, which was a big chunk of Obamacare."

Even this statement is not entirely accurate: Although the mandate was widely viewed as an important component of the health law at passage, it turned out to have relatively limited effects, undercutting Trump's claim that it was a "big chunk" of the law. And although it is true that the 2017 tax bill set the mandate's tax penalty to zero, the requirement remains technically on the books as a toothless requirement. Indeed, the fact that the mandate remains without a penalty is the basis for the lawsuit the administration is currently backing against the law.

Trump and congressional Republicans spent much of 2017 attempting to repeal Obamacare; that effort ended in failure. The current lawsuit challenging Obamacare, led by red-state attorneys general and supported by the White House, is based on dubious legal reasoning that many conservative and libertarian legal scholars—including those who supported previous legal challenges to the law—do not accept. Even if Amy Coney Barret is confirmed to the Supreme Court, it is unlikely that the challenge will succeed in wiping out the entire law.

Pence's dodge is hardly a surprise. As governor of Indiana, he claimed to oppose Obamacare, then presided over a federally funded Medicaid expansion under the Affordable Care Act. He insisted this enactment of a central component of Obamacare was actually a market-based plan to reject it.

Still, his rhetoric is revealing. Republicans spent the better part of a decade running against Obamacare, but the party never united around a coherent plan on how to repeal it or what to do next if they did. With no consensus on how to talk about the law, many GOP lawmakers have simply gone silent about it instead, avoiding the topic of what was once the party's top domestic policy priority.

The GOP's avoidance represents a near-total failure of both policy reform and political imagination. But as a rhetorical strategy in the absence of any clear plan, it makes a certain amount of sense: What easier way to avoid the topic than to pretend it is merely an unpleasant memory, long in the past?