The NFL Is Back. So Is the National Anthem Controversy. And Now There Are Two Anthems.

American society is grappling with complex, nuanced issues connected to race and political power. If we have to filter that debate through the binary of choosing to stand or sit for a national anthem, we'll never get much resolved. 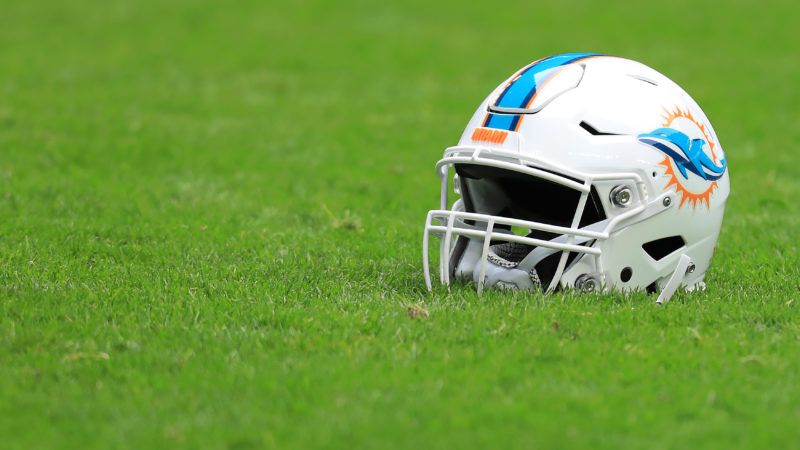 Unhappy with what they call "empty gestures" the Miami Dolphins say they will skip the pre-game "song and dance" that the National Football League plans to perform in front of largely empty stadiums this weekend.

In addition to the traditional playing of the "Star-Spangled Banner," the NFL plans to play "Lift Ev'ry Voice And Sing" before Sunday's games. The latter song has a long history as a rallying cry for civil rights and has been dubbed the "black national anthem." The league is playing it before games this week in an attempt to show support for the Black Lives Matter movement and to make a statement about racial injustice.

But, in a video posted to Twitter on Thursday, more than a dozen Dolphins' players say the whole team plans to skip the pre-game ritual.

"We need changed hearts, not just a response to pressure. Enough, no more fluff and empty gestures," the players say in the video statement. "We need owners with influence and pockets bigger than ours to call-up officials and flex political power."

BREAKING NEWS: The@MiamiDolphins players will stay inside for both national anthems. They express their discontentment with what they call "fluff and empty gestures" by the @NFL pic.twitter.com/ghUktHhPt9

The video statement indicates how far things have shifted in just a few months. We've been watching the mostly silly debate over whether players should stand or kneel for the national anthem since 2016, when Colin Kaepernick, the then-quarterback for the San Francisco 49ers, variously sat or kneeled during the pre-game playing of the national anthem that season. After this summer's protests connected to the police killings of George Floyd, Breonna Taylor, and others, however, the terms of the debate have clearly shifted. This is no longer a question about whether players have the right to refuse to stand for the flag—they do, of course—but is now, finally, focused on the issue Kaepernick was always trying to call attention to in the first place.

That the NFL would respond to this year's protests by adding another song to the pre-game Americana ritual shows just how little the team owners and league executives understand the current moment.

Of course, the league finds itself in an unenviable position. The NFL wants nothing more than to deliver entertainment to as many Americans as possible so it can sell its product to advertisers and TV networks for top dollar. And the NFL has been very, very good at doing that for most of its history. Choosing sides in a political controversy necessarily means alienating some viewers. And losing viewers translates directly into losing revenue.

This is not a problem exclusive to the NFL, but football's place as America's most popular televised sport means the league's response to everything from COVID to police brutality will always be under the spotlight.

The consequences are already visible. Every year, the pollsters at Gallup survey Americans about their sentiments towards various industries. This year, Americans' favorable view of the sports industry fell by 15 percentage points—only the pharmaceutical industry and, naturally, the federal government scored lower. It's unfair to conclude that the drop-off is entirely, or even mostly, tied to the ongoing politicization of professional sports. Indeed, it could simply be that fewer people think positively about the sports industry because it has been so long since we got to go to a game.

Still, politics are surely part of the overall picture, and league executives have no good options. On one side, the players are demanding more than empty gestures—the Dolphins' statement, like the brief NBA strike last month, explicitly calls for team owners to take political actions. The players have no right to control how a team executive uses his private fortune, of course, but the players have cultural capital that the owners lack: Everyone knows Lebron James, but could you pick Dolphins' owner Stephen Ross out of a lineup?

When it comes to adding a second anthem to a pregame ritual that will play in front of mostly empty stadiums, the NFL is trying to appease everyone while not rocking the boat too much in either direction. That might be the league's only viable option for now, but it likely feels unsatisfactory to both sides. The Dolphins (and likely other players on other teams too) are unhappy. Meanwhile, The Wall Street Journal's Jason Riley called it "an act of cowardice masquerading as wokeness."

It's mostly just ridiculous. American society is grappling with complex, nuanced issues connected to race, political power, and the use of state-sanctioned violence against innocent people. If we have to filter that debate through the binary of choosing to stand or sit for a national anthem—or, for that matter, through the equally unsatisfactory binary of a Team Red versus Team Blue election—we'll never get much resolved.

"So, if my dad was a soldier but the cops kill my brother," says Dolphins' linebacker Elandon Roberts in the team's video statement, "do I stand for one anthem and kneel for the other?"