There Is No Defense for Looting

It is one thing to peacefully march against injustice, and quite another to burn down what others built up. 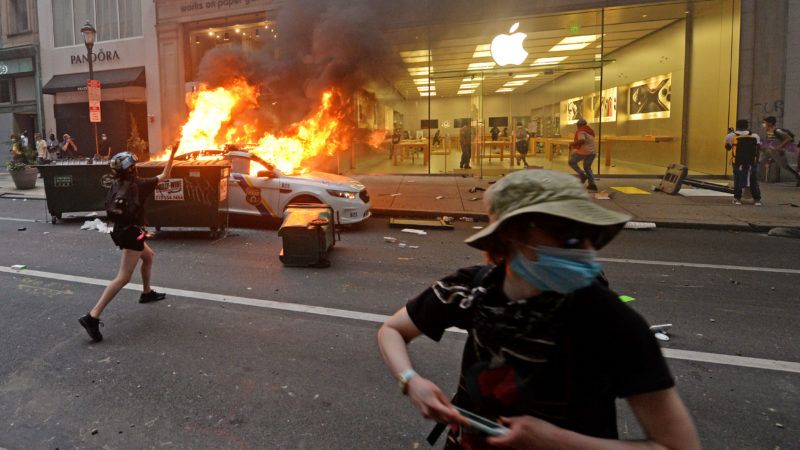 National Public Radio's interview last month with Vicky Osterweil, author of a new book called "In Defense of Looting," generated so much pushback that the network had to add a clarification providing more "context" to help readers "fully assess" her "controversial" views. But there isn't anything that NPR's editors could do to contextualize Osterweil's dangerous message.

In technical terms, her argument—that the American system of property rights is oppressive and looting and mayhem will bring about positive social change—is nuts. The interview contains myriad quotations that read like a parody from The Babylon Bee. I'm not unhappy that NPR published it, as it's important to know what such people think. But why didn't the interviewer ask any tough questions?

NPR asked Osterweil to talk about rioting as a tactic, in the way a lifestyle reporter might ask a celebrity to talk a little about a new movie. As the author explains, rioting accomplishes "important things." For starters, "It gets people what they need for free immediately, which means that they are capable of living and reproducing their lives without having to rely on jobs or a wage…That's looting's most basic tactical power as a political mode of action."

Got that? People steal stuff because they then don't have to pay for it and, well, that means they don't have to work to earn money to pay for those things. I'm not sure how theft becomes a "political mode of action," but Osterweil assured readers that breaking store windows and grabbing consumer goods is more important now than ever—given that "during COVID times" jobs are unreliable, unavailable, or sometimes dangerous.

As an aside, many official coronavirus-related policies strike me as glorified looting, even though lawmakers don't use bricks and Molotov cocktails. The governor, and even the president, can declare that people may live rent-free in other people's buildings. Congress can run up debt to send us stimulus checks. Governors can arbitrarily force businesses to shut their doors, thus destroying what entrepreneurs have spent their lives creating.

Fortunately, the author explains traditional looting isn't simply about stealing. It has a deeper and more uplifting purpose. "It also attacks the very way in which food and things are distributed," Osterweil added. "It attacks the idea of property, and it attacks the idea that in order for someone to have a roof over their head or have a meal ticket, they have to work for a boss, in order to buy things…It points to the way in which that's unjust."

When my oldest daughter was very young, she asked why we have to pay for things. "Why can't everything be free?" I explained that if everything were free, no one would work or produce anything or invest in factories and stores. In almost no time, we'd be staring down vast shortages—and people would go hungry. Violent thugs would rob and pillage. Society would collapse. That was a great question from a 6-year-old, but Osterweil is an adult.

Unfortunately, many American adults seem to share this childish view of the world. After my column explaining what rent control does to small landlords was posted in a left-leaning social-media group, I was taken aback by the vicious ad hominem responses. As a building owner, I'm apparently a greedy oppressor—and never mind the investments, renovations, and hard work that goes into providing quality housing for others at an agreed-upon price. One poster even called me a member of the "petty bourgeoisie." Good grief.

Modern-day leftists have no understanding of how society builds wealth and prosperity. They revile those who create it, even as they post photos to the Internet from their iPhones. Do they believe such wonderful innovations fell from the sky? Didn't any of their professors teach them about the violence, starvation, and misery that took place in Soviet Russia—and every other society that attacked the idea of private property?

"Destroying a small business is akin to destroying an artist's studio, a scholar's library or a chef's kitchen," wrote Steven Horwitz, a professor of free enterprise at Ball State University in Indiana. "It's not just a matter of the loss of material goods, and insurance isn't the point. It's a loss of the space in which they make meaning in their lives and for others." People who defend rioting defend the destruction of the very things that make us human. They are the ones being unjust.

I'm a strong defender of peaceful protests against police abuse and have been writing about the need for reform for years. But it's one thing to peacefully march against injustice, and quite another to burn down what others built up. It's a warning sign for our society when it doesn't occur to a major news outlet that a defense of looting deserves more scrutiny than a puff interview.