But do the metaphors hold up? 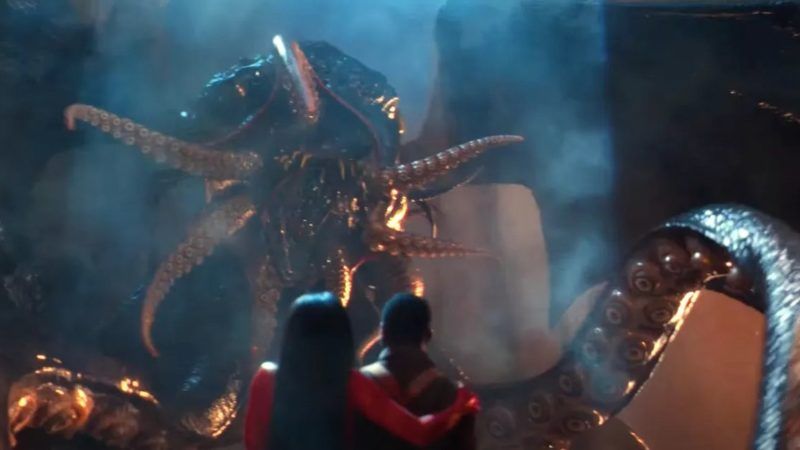 Everything you need to know about Lovecraft Country happens in the first two or three minutes. A black GI is racing through hilltop trenches, fighting hand-to-hand with Chinese troops in a scene that looks like something out of the Korean War epic Pork Chop Hill.

There's noise outside the trench, and the soldier leaps up to the battlefield just as the film turns from black and white to color. No Chinese up there—just flying saucers, Martian war robots from The War Of The Worlds, and befanged, leathery, winged things, all lurching toward the Americans.

As they close in, a voice crackles over the soundtrack: "What's a matter? Where you going, black boy?" But then, salvation: One of the bestial bellies splits open to reveal Jackie Robinson, the Dark Destroyer, swinging his mighty bat, and saurian heads going flying in all directions as he connects. And the dream dissolves to reveal a young black man awaking from a troubled sleep on a seedy bus as the rural South cascades past the windows.

That's Lovecraft Country: A mélange of spectacular special effects, nerdy obsession, and crippling racial animus, all wrapped up in a tumbling free-form narrative that doesn't make much sense.

Produced by a team led by J.J. Abrams and based on Matt Ruff's cult novel of the same name, Lovecraft Country—a 10-hour HBO miniseries—is a weird mess of imaginative but failed metaphors in which America's tormented racial history is presented as a pulp horror story.

It's an interesting idea, but pulp horror stories are best consumed in a single, quick encounter, before their limitations of plot and characterization become too obvious to ignore. Lovecraft Country is reduced to one of the walking dead long before its final credits roll.

Set in the mid-1950s, Lovecraft Country is the tale of a cross-country trek from Chicago to Massachusetts by three black friends. Korean War vet Atticus Turner (Jonathan Majors, Da 5 Bloods) is in search of his missing father. Turner's uncle George (Courtney B. Vance, who played Johnnie Cochran in the FX miniseries on the O.J. Simpson case) joins the trip to gather material for the line of books he publishes, The Safe Negro Travel Guide. (Yes, in the 1950s and '60s, such things were necessary.) And Atticus' childhood pal, singer Leti Lewis (Jurnee Smollet, True Blood), is basically along for the ride.

They share more than a desire to find Atticus' father. All three are science-fiction nerds, obsessed with the dark fantasy novels of H.P. Lovecraft and his circle and seemingly undisturbed by the anything-but-subtle racism of some of them. (Many of their books are obtained through George's combination garage-bookstore-publishing-house business, in my opinion an underutilized financial concept.)

Lovecraft's work largely was based on the concept that our universe is a tiny bubble in a much grander cosmos of relentless chaos and senseless violence. When the walls are breached from time to time, monstrous entities with a voracious appetite for grisly pandemonium break through. It was, perhaps, a metaphor for Lovecraft's belief that America was a holdout against the bedlamite threat of immigration from Africa and Asia.

Lovecraft Country inverts the bioracist formula of Lovecraft's work and turns America into a mindless brutal landscape in which lunatic violence can explode against black people at any moment. Sometimes the perpetrators are shotgun-wielding rednecks, sometimes the toothy slime worms of Lovecraft's imagination. (The latter might have been expected by Atticus and his companions, who seem to have overlooked that their destination—Ardham, Massachusetts—has a name suspiciously similar to Arkham, the Massachusetts city in which some of Lovecraft's most lurid tales took place.) In terms of intellect and moral indifference, it scarcely seems to matter which is which.

As a metaphor, that may work out; as a story, much less so. The beauty of Lovecraft's ideas in terms of literary utility was that because the monsters existed, by definition, outside the world of human rationality, he didn't have to spend a lot of time developing characters or rationales or even plots. Just poke a hole in the space-time continuum and set the creatures to biting stuff. That works just fine for Lovecraft's 12-year-old fans, who may indeed enjoy Lovecraft Country between its talky bits. For the rest of us, it's kind of, well, wormy.

It's a shame, because, in its more muted moments, Lovecraft Country offers a disturbing reminder of the totalitarian society in which black Americans lived for its first 200 or so years. It's the quiet vignettes, not the shotgun blasts and chase scenes, that the story is told most effectively: The long line of bedraggled black workers at the end of the day, waiting endlessly for the always-tardy "colored" bus to talk them back to the poor side of town. The father leading his little daughter past the door of an ice-cream stand, around the corner to the pickup window for black customers.

And, when a local vehicle pulls up to rescue the passengers of a broken-down interstate bus, the way that Attricus and the other black passengers, without being told a thing, simply shoulder their luggage and start walking, all too aware that they're not welcome to ride.

As they trudge toward the next town, one of them asks Atticus about the book he's carrying. It's one of Edgar Rice Burroughs' novels about Mars, Atticus explains, in which a former Confederate army officer is magically transported to Mars, where he becomes a warlord among the planet's weakling natives. "How can you enjoy a story about a Confederate?" wonders the other traveler.

"Stories are like people," Atticus replies. "You're just trying to cherish them and overlook their flaws." Not this one.