Coroner and Hitmen are only new to us Yanks. 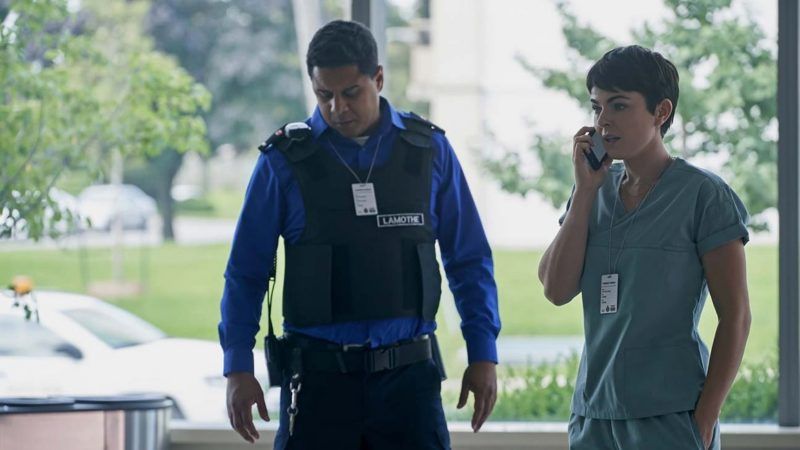 Fear not the dog days of August. (At least, on television. War with China and mass starvation are on somebody else's beat.) TV is turning its multicultural eye to the comparative anthropology of criminal justice systems, and your brain cells will be aflame by the time it's all over.

Though, I'll confess, the more interesting thing on The CW's Canadian import Coroner is dating culture on the great northern tundra. Here, for instance, is the introductory conversation between romantic leads Jenny and Liam: She explains that her husband, who died three months ago of an aneurysm, was a degenerate gambler who defaulted on two mortgages on their home and let his life insurance lapse, throwing the family into hopeless debt.

"So what about you?" she inquires brightly.

"I was in the army, in Afghanistan," Liam replies. "I killed a bunch of people."

Lascivious outdoor sex ensues, after which they examine one another's old bullet-wound scars. You think I'm making this up. I soooo wish.

Coroner, which has already aired for two seasons in Canada, is part of the puzzling summer crop of reruns masquerading as new shows.  It's the tale of crusading forensic pathologist Jenny (played by Canadian actress Serinda Swan, known mostly for looking a bit like the 1975ish incarnation of Tyne Daly.)

Her city Toronto having apparently already defunded its police department, Jenny has to solve every homicide, but that's not as weighty a responsibility as it sounds because the criminals, like everybody else in Canada, are pretty nice. (When Jenny asks what one murdered reform-school inmate was in for, a prison social worker earnestly explains: "He was antifa. He was all about the future.")

Curiously, Canada seems to have a continuing fascination with heroic pathologists. Coroner is at least the fourth show in the country's TV history about a superstar coroner, going all the way back to Wojeck in 1966, notable mainly because it launched the career of Dean Vernon Wormer, errr, actor John Vernon, source of the immortal disciplinary decree, "No more fun of any kind!"

That's an apt summation of Coroner, which aside from those bullet wounds on Jenny's naked back is the very essence of Canadian tepidity. And when you watch TV's newest British import, in which brains are splattered every few minutes for big laughs, it's hard to believe these two countries were once part of the same imperial empire.

The Brit show—yes, it already aired there a few months back—is called Hitmen and airs on NBC's new streaming service Peacock. It stars Mel Giedroyc and Sue Perkins as a pair of crabby, menopausal and quite inept professional killers.

As one chases down a fleeing victim, the other will inevitably be on the phone arguing with a credit card company or an overdemanding client. ("Torture isn't really our thing. … It's one thing killing somebody, but popping their tits in a laminator… .") They often get tricked into hauling the victims to a McDonald's drive-up window or birthday party or even playing charades with them before snuffing them. The humor is darker than a witch's heart, most of it consisting of pranks played on people who are about to have their brains blown out.

Surprisingly, this gets old after about the first five minutes. Giedroyc and Perkins used to be the hosts of a Brit cooking-competition show called The Great British Bake Off. They probably should have stuck with that, but maybe experimented with cutting the throats of the contestants who messed up the scones.