No, Trump Can't Delay the Election

And no, mail-in voting is not more vulnerable to fraud than absentee voting. It's actually the exact same thing. 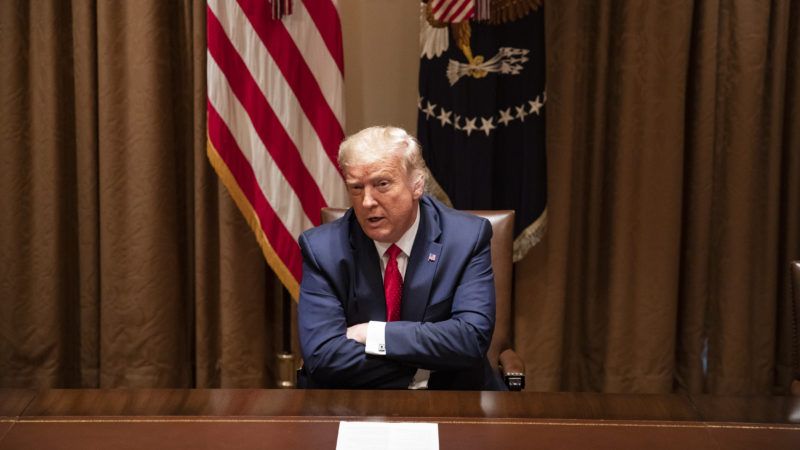 Despite what he suggested in a Thursday morning tweet, President Donald Trump does not have the authority to cancel or postpone the 2020 general election. And if the election doesn't take place for some reason, Trump would have to leave office in January.

Let's back up. In case you haven't seen it already, here's the grenade the president tossed into the news cycle this morning (and has now "pinned" to the top of his Twitter profile):

With Universal Mail-In Voting (not Absentee Voting, which is good), 2020 will be the most INACCURATE & FRAUDULENT Election in history. It will be a great embarrassment to the USA. Delay the Election until people can properly, securely and safely vote???

Both sentences of the president's tweet are inaccurate, but let's take the second part first, since that's the bit that threatens to blow a gigantic hole in 230-plus years of American democratic tradition. Election dates are set by the U.S. Constitution, by Congress, and by the states—the president has literally no authority over it.

When it comes to picking the president, there's actually no constitutional requirement for a popular election at all. What the constitution does say is that Congress gets to pick the date by which the states must choose their presidential electors—that is, the 538 members of the electoral college. Under current law, that date is the first Tuesday after the first Monday in November.

How the states pick those electors is up to each state legislature to decide. "While every state currently chooses its electors through popular election—where votes cast for presidential candidates are counted as votes for the electors pledged to those candidates—a state legislature could decide to select electors itself if it determined elections were infeasible," the Congressional Research Service (CRS) noted in a March report about elections during the COVID-19 pandemic. "Indeed, it was common for legislatures to select electors without popular elections until the mid-1800s."

The CRS reports that some state constitutions allow governors to postpone elections for emergencies, but there is no provision in the U.S. Constitution allowing federal officials to change the date unless Congress changes the law or a constitutional amendment is passed. But that's never happened during wars, pandemics, or other national emergencies—there is no reason to think it should happen this year.

In fact, some Republicans in Congress are already rejecting the idea.

Reminder: Election dates are set by Congress. And I will oppose any attempts to delay the #2020Election. https://t.co/ptjG86YiF6

Just for fun, here's what would happen if enough states—presumably red states—were to cancel or postpone the election, and therefore no candidate won an outright majority in the electoral college, according to that same CRS report.

In that case, the election would be decided by the House of Representatives at the start of its next term: January 6, 2021. But the current House term expires on January 3. If, hypothetically, all elections were canceled or postponed and there was no new Congress to meet on January 6, the CRS report says, that doesn't change the fact that the incumbent president's term ends at noon on January 20th.

"There are no provisions of law permitting a President to stay in office after this date, even in the event of a national emergency, short of the ratification of a new constitutional amendment," according to the CRS.

In that absolute worst-case scenario, the presidential order of succession would come into play. There would be no elected vice president, so Mike Pence is out of the running. If there was a functioning House of Representatives, the new Speaker of the House would become president. If that person could not serve, the president pro tempore of the Senate—currently Sen. Chuck Grassley (R–Iowa), though that could change before January—would become the nation's chief executive.

The bottom line: Trump can't cancel or postpone the election, and even if the election doesn't take place for some reason, he can't legally remain in office.

What about the other part of Trump's Thursday morning bombshell tweet? For starters, he suggests that there is some difference between mail-in voting and absentee voting when they are actually the same thing. Some states require that you provide an excuse when you ask for an absentee ballot, but most have now switched to no-excuse absentee balloting—otherwise known generally as "mail-in voting"—in light of the COVID-19 pandemic. Either way, the process for voting is the same: you get a ballot, you fill it out, and you mail it back.

There are also a handful of states that have switched to conducting elections entirely by mail, and none of them have seen increases in voter fraud—something that is incredibly rare no matter how elections are conducted.

Regardless of what you call it or how many people participate, there's little indication that voting by mail is some sort of scheme to defraud Republicans. Colorado is one of the states that recently switched to all-mail balloting, and the system was set up by a then-Secretary of State Wayne Williams—a Republican.

An analysis of voting patterns conducted by the Brennan Center, a legal nonprofit housed at New York University's law school, found that that the people most likely to vote by mail in 2016 were white voters over the age of 65—a key Trump demographic.

It's true that some states are likely to be overwhelmed by the number of absentee ballots cast this year—a month after its primary election, New York is still counting votes cast by mail—but Trump's attempt to delegitimize mail-in voting is likely only hurting him and his party. Indeed, in June, Politico reported that registered Democrats in Florida had requested roughly 300,000 more absentee ballots than registered Republicans—a gap that the state's Democratic Party chairman attributed to Trump's success at tamping down Republican enthusiasm for voting by mail.

The simplest explanation for Trump's bizarre tweet on Thursday morning is that he's a deeply unpopular incumbent—as even he has recently admitted—who trails in the polls and doesn't see an easy way to turn things around. Calling to delay the election, even as he is also insisting that it is safe for schools to open, comes off as hypocritical, weak, and politically self-defeating.

It's always been obvious that Trump didn't care to learn about the actual limits or powers of the office he holds. If he had, he would already know how ridiculous this all sounds. He's making excuses for losing before the game is even over. It's not dictatorial. It's just kind of pathetic.