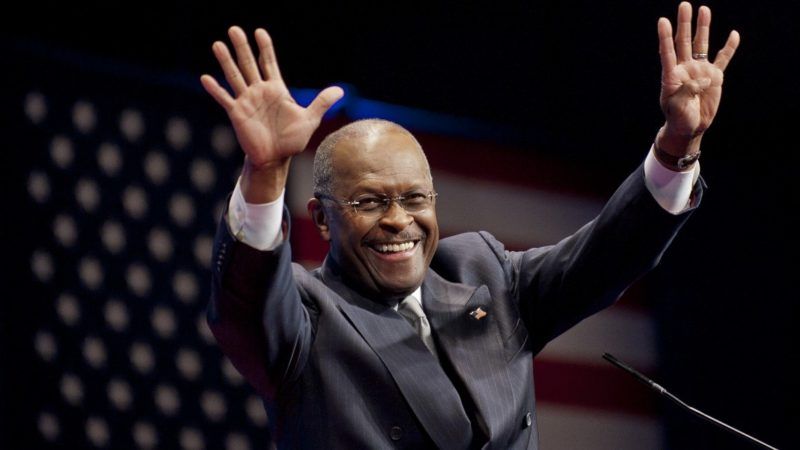 Herman Cain, the pizza magnate who ran for president as a Republican in 2012, has died from COVID-19 complications, according to his official Twitter account and website. Cain was 74:

You're never ready for the kind of news we are grappling with this morning. But we have no choice but to seek and find God's strength and comfort to deal… #HermanCain https://t.co/BtOgoLVqKz

Cain had been in the hospital since earlier in July after testing positive for COVID-19. While it's not certain where Cain was infected, he was a notable attendee at a rally for President Donald Trump's re-election in Tulsa, Oklahoma, in late June and was photographed there not wearing a mask. Several Trump advance staffers there also tested positive for the coronavirus.

Cain was well known as a candidate for his "9-9-9" income tax proposal, a flat tax that replaced all current federal taxes with a 9 percent income, sales, and corporate tax. He was also a businessman, running Godfather's Pizza, then later serving on the board of directors of the Federal Reserve Bank of Kansas City. Read here how Reason summarized Cain's platform and positions in 2011, such as they were. In a way, Cain was a precursor to Trump: a businessman with populist conservative views who attempted to use his lack of experience in politics as an advantage rather than a liability, and who spoke with almost comedic bluntness even when it resulted in people mocking him.

For about two weeks in October and November of 2011, Cain was actually the frontrunner for the Republican Party's nomination. The volatile nomination process back then saw nearly every candidate briefly take the lead in the primary race to challenge President Barack Obama's second term. Republican voters ultimately settled on Mitt Romney.

Trump had considered nominating Cain to a vacant seat on the Federal Reserve Board in 2019. But after it became clear that Cain did not have enough support to secure the nomination, he withdrew his name, claiming he didn't want to have to give up his business interests in order to serve.

Cain is survived by his wife, Gloria; two children; and several grandchildren.