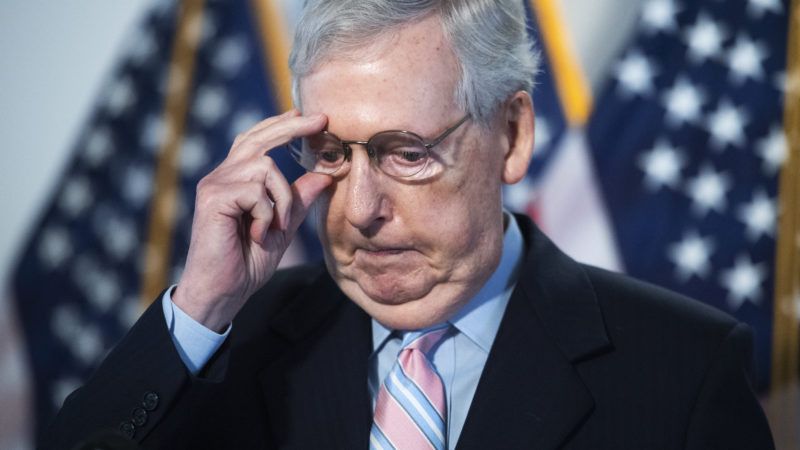 The $1 trillion coronavirus relief package released by Senate Republicans this week includes billions of dollars for new weapons and defense projects that appear to have little to do with fighting the pandemic.

Part of the Senate Republicans' relief package—collectively known as the Health, Economic Assistance, Liability Protection and Schools (HEALS) Act—is a $306 billion appropriations bill authored by Sen. Richard Shelby (R–Ala.). That legislation includes close to $30 billion in defense spending, with a good chunk of that money allocated to purchasing new aircraft, ships, and missiles.

"I believe we need to act with a sense of urgency. The American people are fighters, but the accumulated strain of this pandemic is a serious burden on folks," said Shelby, who chairs the Senate's Appropriations Committee, in a press release. "With the additional resources this legislation provides, I believe we can give them greater confidence that we are getting our arms around this virus."

Speaking of arms, Shelby's bill includes $283 million for the Army through the end of 2022 "to prevent, prepare for, and respond to coronavirus, domestically or internationally" on the condition that money be spent on acquiring AH–64 Apache attack helicopters made by Boeing.

The legislation also gives the Army another $375 million for upgrading its complement of Stryker armored personnel carriers, which are made by General Dynamics. The Army reportedly awarded the company a $2.48 billion contract to build new, more mine-resistant Stryker vehicles in June. The text of the HEALS Act says that this funding will come in addition to any money that's already been allocated.

The Air Force, meanwhile, will get $686 million to purchase more F-35As, a fighter plane made by Lockheed Martin. Its development has been plagued by cost overruns and delays. The bill will also put $720 million into funding buying more C-130J military transport aircraft, in addition to $650 million to pay for replacement wings for the Air Force's A-10 aircraft.

The Navy will get its beak wet too, receiving $1 billion to purchase P–8A Poseidon aircraft, plus $1.4 billion for new medical ships, $260 million for a new Expeditionary Fast Transport vessel, $41 million for new Naval Strike Missiles and launchers (made by Raytheon), as a well as close to $50 million for submarine-detecting "sonobuoys."

The Washington Post reports that many of these programs had their funding repurposed to help pay for President Donald Trump's border wall. Republicans' coronavirus legislation replaces that funding, and then some.

The Trump administration only slashed the budget for the Navy's procure P–8A Poseidon aircraft by $180 million, but is now seeing its funding increased by $1 billion, reports the Post.

The Department of Defense is hardly the only recipient of generous line items in the Senate GOP's relief bill. The Trump administration reportedly requested that the legislation include $1.75 billion for a new FBI headquarters building (although the Wall Street Journal reports that Senate Majority Leader Mitch McConnell (R–Ky.) has come against that particular item).

Whether all this defense pork will end up being passed by the Senate remains to be seen.

Given that the Senate just last week approved a $740 billion defense spending bill, and the federal government ran an $864 billion budget deficit last month, one could argue now is not the time to spend more money on the military.