Dispatch From Portland: A Distinct Lack of Crowbars and Cops

Up close with the #WallofMoms on night 53 of the protests 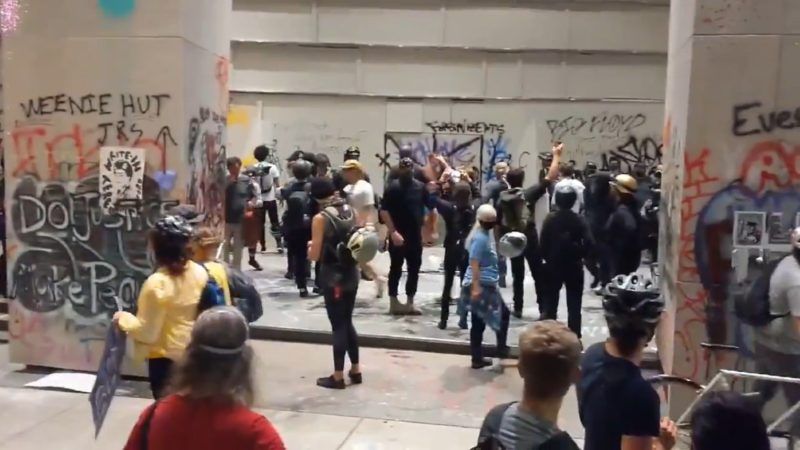 Portland looks pretty normal the morning I roll into town, birds singing, fresh air. I head downtown to the Federal Building, locus of the narrative we've been seeing all over the world: federal forces tear-gassing demonstrators and pummeling the legs of a Navy vet apparently made of brick.

Driving toward the Mark O. Hatfield United States Courthouse yesterday, the city appears relatively intact. Most stores are boarded up, but that's mostly due to COVID-19, which is on the rise in Oregon. The courthouse, however, looks anything but normal. The building is unrecognizable, its face completely gone—it looks like a building under construction, albeit with no doors, no windows. At noon, workmen are disassembling the temporary fencing that's been pulled down each night since the feds arrived. Asked whether they're going to paint over the graffiti, a foreman looks incredulous.

By "they," he does not mean the protestors, who've been at it 53 nights: the thousands of locals who march while chanting "BLACK LIVES MATTER" and "SAY HER NAME" and "HANDS UP, DON'T SHOOT" and "FUCK THE POLICE." They are here again by 8 p.m., including a new contingent of women wearing yellow, women who have responded to social-media calls to create a Wall of Moms. There is some question as to whether this call started organically as a mom-group thing or, as a way to create an unimpeachably sympathetic faction, was covertly orchestrated by antifa. And while the question might seem an interesting or provocative one, it's apparently not to the two moms I ask, they're caught up in the moment, one goes off to speak with a news crew.

"I think she heard about it on Reddit?" responds one husband, before joining in 30 minutes of call-and-response, "FUCK TED WHEELER" and "FEDS GO HOME" and "ALL COPS ARE BASTARDS," the last round punctuated by the booms of a drum corps and several thousand people who stream past the federal building, ready for more chanting, more gathering, ready to show the world that they are peaceful protestors.

Meanwhile, one block away on a dark corner, a half-dozen young men on motorcycles and bicycles assemble. These are civilians, self-appointed to block off the street. An overhead camera has been spray-painted so as not to capture, maybe, the groups of two and three walking past. They are dressed in black; their faces are covered; they carry or wear bike helmets; their militia-like garb is meant to impart, one imagines, an air of menace. They do not look menacing. They look young, ungainly, and unsure how to proceed. One problem: The fencing has not been re-erected, so there's nothing for them to pull down. Instead they dance and skateboard and yell at each other. A burnt-out-looking white dude shouts, "I've spoken to a dozen black men! You don't speak for them! What you are doing is not about Black Lives Matter!" A young Asian woman in full-black garb charges him and shouts, "YOU DON'T SPEAK FOR BLACK PEOPLE! SHUT THE FUCK UP!" The crowd cheers.

This is the "they" the foreman spoke of, the 200 or so that gather every night. They've been cooped up for months and now they're ready to burn, to get some mayhem going, though they don't see it that way.

"We're just here to protect people and get their voices heard," a 22-year-old guy tells me, as he and his crew each grab a plywood shield from a pile someone has dumped on the ground. His friend was here two nights ago and got hit in the legs with pepper bullets.

It's now 11:30 and the larger group of protestors is making one last sweep through, shouting "FUCK TED WHEELER" over and over as the 200 install a #WallofMoms between themselves and the building. This seems to quell things a bit, neither the group outside or any feds inside seeming to have an appetite for mowing down a bunch of middle-aged women. But then the moms are let go and a new volley is launched at the building, people banging on it with their skateboards and scrabbling at it with their hands.

"Did not one of them think to bring any tools, maybe a hammer or a crowbar?" asks my friend. While one imagines what kind of trouble this might bring from the cops, there's no reason to worry about the Portland police, not one of whom I've seen in three-plus hours. There is zero police presence, the mayor having years ago instructed the police that protesters are not to be arrested, the definition of protestor apparently being fungible. And so the battering, the rave-like mania, carries on.

"What will we do if we do get inside?" a young woman asks her friend. I tell her that I don't think people have thought that far ahead; that it's about the show out here, not about carrying forth any particular plan.

"I think you're right," she says, looking a little relieved. She's wearing a jumper and weighs maybe 90 pounds soaking wet; she won't be ready for any physical confrontation.

But it's coming for her anyway. Several young men have torn a hole in the plywood, one is banging on it with a fire extinguisher, and the shield-boys are banging on it with their shields. Instantly the air is filled with military-grade CS gas, there are loud flash-bangs, and the crowd is falling back, running, getting out of the way of the first volleys.

"Do you need your eyes rinsed out?" three people ask as we make our way to the car, coughing. It's 1:45 a.m., and it does not look as though there is going to be the sort of violent direct clashes that happened the previous two nights. Maybe the feds have gleaned that the optics of this aren't great.

If the lone motorcyclists and bicyclists stationed at intersections downtown, trying to block our way, have an agenda, I don't know what it is. What I do know is, despite their telling us we can't drive around them, we do, where we see, for the first time, a Portland police vehicle, driving into the night and away.

Nancy Rommelmann is a journalist and author based in New York City.