ICE's Plan To Kick Out Foreign Students Is Chilling 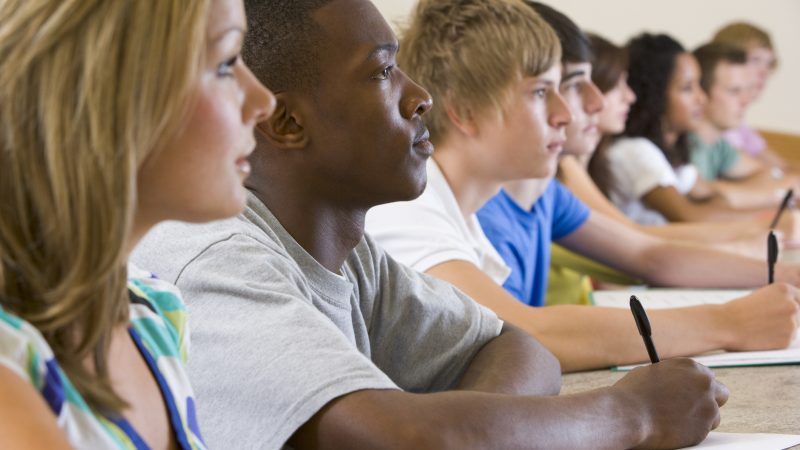 If there was any doubt that the Trump administration will seize on any and every pretext to slam immigrants, it should be put to rest now. The Immigration and Customs Enforcement (ICE) just issued guidance that is using the pandemic to kick out all international students who are not enrolled in regular, in-person classes starting this fall.

These rules will penalize students whose colleges have decided to go online—without securing any discernible economic, educational, health, or security upside for America. To the contrary, in fact. So why is the administration doing this? Basically to purge as many immigrants from the country as possible before the November elections—and discourage new ones from coming in.

Most foreign students come to American on non-immigrant F-1 and M-1 visas that require them to maintain a full course load in universities approved by ICE's Student and Exchange Visitor Program (SEVP). In order to guard against diploma mills, SEVP offers accreditation mostly to universities that offer classroom instruction and usually limits foreign students to three credit hours of online instruction per semester.

But when the coronavirus hit and colleges moved everyone to online instruction, ICE did the only sensible thing and allowed international students to finish their spring and summer semesters by taking all their classes online like everyone else without voiding their visas. However, ICE is rescinding that guidance going forward and is stipulating that international students attending online-only programs must leave the United States. If they fail to do so, they'll face deportation and risk getting barred from the country.

There are 1.2 million foreign students in the U.S. enrolled in 5,300 universities. A third of these universities had already announced plans to go fully or partially online. This means that if these students are not able to switch to colleges offering on-campus instructions, which most of them won't be able to do because colleges don't have vacant seats, they will be instantly out of luck. But even those who manage to switch won't necessarily be safe. Why? Because ICE is also saying that if secondary outbreaks prompt these universities to switch to distant learning in the fall, hardly a remote possibility, it will require the students to leave mid-semester—never mind that many of them have been paying full tuition fees that run upwards of $50,000 annually at many private nonprofit colleges. But ICE pooh-poohs their predicament claiming that they can go home and continue in their programs.

But that is easier said than done given that not all countries have reliable internet connections at all times. Moreover, trying to offer online instruction across time zones and continents will pose massive challenges. Will U.S. faculty hold office hours and students attend classes in the middle of the night? Also, one major attraction of an American education is the opportunity to experience American life and build networks with faculty and interact with peers from across the world. All of that will go out of the window if these kids are forced to return home.

International students, 5.5 percent of the higher education population, pumped $41 billion into American universities and supported nearly 460,000 campus and other jobs in the 2018-19 academic year, thanks to the top tuition dollars they pay. Universities rely on those contributions to subsidize in-state tuition for American kids. They also depend on foreign graduate students to assist in classroom instruction, especially in STEM fields that Americans typically shun. Many technical, hard science programs will have a tough time operating without access to their services.

All of this means that universities can't end their reliance on foreign students on a dime, so to speak, without hurting American students especially at a time when state governments reeling from COVID-19-related revenue losses are cutting back their contributions. So many of them will be tempted to maintain campus instruction despite the added risk to the health of faculty and students—which is why ICE's guidance is nothing short of "horrifying," as the American Council on Education, a higher education lobbying group, put it.

Harvard University and Massachusetts Institute of Technology, both of whom had decided to move entirely online, have already sued over ICE's new guidance. But even if the courts stay the rules pending a final ruling, something that could take a year, many students will leave rather than live in uncertainty in America. Moreover, new students will be reluctant to enroll next fall out of fear that if Trump gets re-elected, he'll renew his slams on them at the drop of a hat. This means that regardless of whether Trump wins or loses in November, these rules will succeed in deterring foreign students for at least yet another year—after three years straight of declining enrollment.

Trump has already used the pandemic to shut down practically all legal immigration to the country till the end of this year including high-skilled workers and the family members of Americans and permanent residents.

But this is a diabolical plan whose only purpose is to feed this administration's obsessive and irrational hostility towards foreigners and immigrants. There is really no other explanation.