Cancel Culture Is Out of Control

The online mob is running amok. 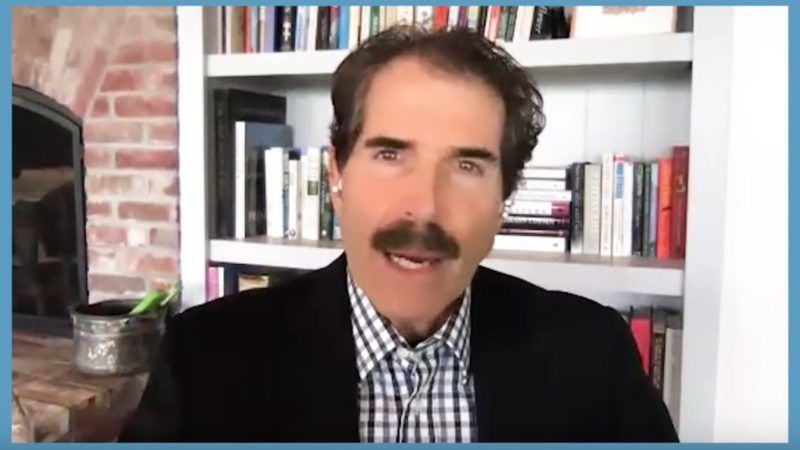 What terrible thing had he done? As I show in my new video, he tweeted that Black Lives Matter "torpedoed itself, with its full-fledged support of #defundthepolice." Instead of defunding, Uhlig suggested, "train them better."

Hundreds of people then signed a petition to demand that Uhlig, a University of Chicago professor and head of the Journal of Political Economy, resign. Even prominent economists like Janet Yellen and Paul Krugman joined the mob. Krugman called Uhlig "another privileged white man who evidently cannot control his urge to belittle the concerns of those less fortunate."

But that's just a lie. Uhlig wasn't belittling concerns of anyone less fortunate.

"There was nothing racist or discriminatory in how he said it," says Reason magazine senior editor Robby Soave, who covers the new "woke" protests. "But because he has some different views from the protesters, he must be a racist."

Uhlig was placed on leave by the journal he ran.

The new totalitarians demand that no one criticize their view of the world.

The online mob even attacks its fellow Democrats.

But the mob attacked Shor. "Come get your boy," one tweeted.

His bosses did. Even though Shor issued a groveling apology, he was fired.

Soave points out, "There's a cruel streak in activism that says, 'If you disagree with me…you have no right to speak.'"

"Why are they winning?" I ask. "Their argument is ridiculous."

A Boeing executive was even forced out for opposing women's service in the military—30 years ago.

Michigan State pushed out a physicist when a twitter mob from its "Graduate Employees Union" labeled him a "scientific racist." What racist thing had the physicist done? He "rejects the idea that scientists should categorically exclude the possibility of average genetic differences among groups," is how a Wall Street Journal column explained it.

Harry Potter author J.K. Rowling is being smeared as "transphobic." When a tax researcher was fired for saying, "Identifying as a woman does not make a person a woman," Rowling tweeted, incredulously, "Force women out of their jobs for stating that sex is real?"

She said she has nothing against trans people, but she's "concerned about the huge explosion in young women wishing to transition."

The Twitter mob claimed her "hate" was "killing trans people."

Some staff at Hachette, her publisher, refused to work on her next book. Actors in her Harry Potter movies spoke out against her.

But Rowling didn't back down. "It isn't hate to speak the truth," she tweeted.

She also mocked a charity that used the phrase "people who menstruate" instead of women, tweeting: "There used to be a word for those people. Someone help me out. Wumben? Wimpund? Woomud?"

That further incensed the mob. It claimed her "hate…leads to trans women, especially teens and black trans women, becoming victims of sexual assault."

But Rowling is the rare person popular enough to be able to resist the mob. Her publisher spoke up for her, saying, "Freedom of speech is the cornerstone of publishing."

And the University of Chicago stood up to the mob, too. The school, after a 10-day investigation, announced there was "no basis" for taking away Harold Uhlig's job. He's been reinstated.

That's how these cases should be handled.

"The solution is to challenge these people," says Soave. "We just have to speak up."

Those of us who can, must.