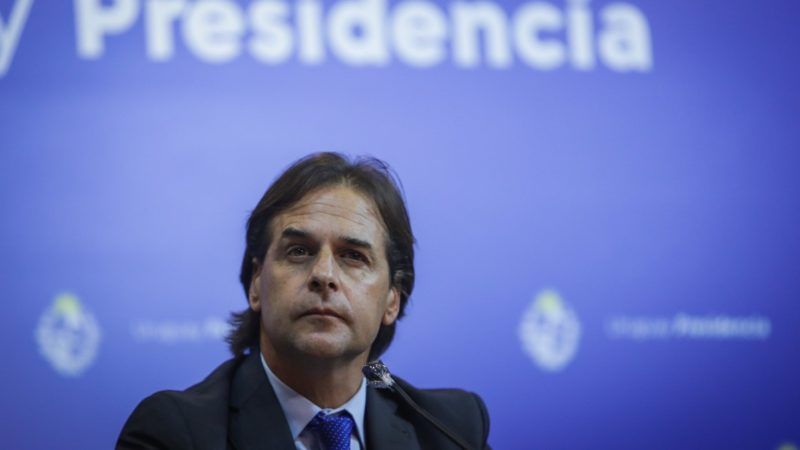 South America's libertarian moment was supposed to have arrived in Brazil. A free-market economist trained in Chicago, Paulo Guedes, is the finance minister, and several young members from the country's freedom movement of think tanks, student organizations, and activist groups hold key government posts, which they are using to roll back decades of bureaucratic growth.

The main obstacle to their efforts is President Jair Bolsonaro, a fan of military rule who—despite a photo-op holding books by Claude-Frédéric Bastiat and Ludwig von Mises—is no libertarian when it comes to civil liberties or economics. Brazilian libertarians' alliance with Bolsonaro may indeed prove to be a Faustian bargain.

While Brazil may have swung and missed, in Uruguay, Brazil's small neighbor to the southeast, free-market policies are enjoying a resurgence that springs from the top of President Luis Lacalle Pou's new administration. Although his election last year received scant attention from the global media, Lacalle Pou's rise to power ended 15 years of government by the leftist Broad Front (Frente Amplio).

Uruguay's president from 2010 to 2015 was José "Pepe" Mujica, a former member of the violent Tupamaros guerrilla group who achieved notoriety as a plainspoken populist. A smitten Guardian journalist compared Mujica to Nelson Mandela because he was jailed for 13 years in the 1970s and '80s, and described him in saintly terms for his apparent embrace of simple living: "The man whom most Uruguayans call El Pepe drives a 25-year-old Volkswagen Beetle, lives in a tiny house on a rural smallholding, and gives away 90% of his salary."

According to Uruguayan writer Hanna Fischer, Mujica's veneer of private austerity disguised his reckless handling of public finances. His government oversaw "the largest increase in government spending since democracy was restored in Uruguay in 1985." In a power grab that was eventually overturned by the Supreme Court, Mujica sought to impose double taxation on large landholdings. Much like his leftist allies in the region, Mujica passed a "media law" that the newspaper El País called a threat to free speech. And, although he legalized marijuana in Uruguay, Mujica made sure to include "a state-enforced oligopoly, production and consumption quotas, price-fixing, [and] coerced registrations," as one commentator explained.

Lacalle Pou's personal style and policy preferences are a contrast with that of his older Broad Front predecessors, Mujica and Tabaré Vásquez, a socialist doctor who served as president from 2005–2010 and again from 2015–2020. The son of former National Party President Luis Alberto Lacalle (1990–1995), Lacalle Pou, a 46-year-old lawyer, is a skilled surfer who enjoys hunting wild boars. In 2019, he narrowly beat his Broad Front rival with a platform of decentralization, transparency, and cutting red tape. He even admitted casual drug use in his youth, inhaling included.

Defeating the Latin American hard left in a single election does not guarantee successful reforms. Argentina's Mauricio Macri, a center-right businessman who was elected in 2015 to repair the damage done by 12 years of socialist mismanagement under Presidents Néstor Kirchner and Cristina Fernández de Kirchner. The married couple served four and eight years as president, respectively, and their inflationary, debt-fuelled policies made the Augean Stables look like Marie Kondo's living room. Macri promised to right the ship, but once elected chose a "gradualist" approach that failed to curb Argentina's deficits, debt, or inflation. As a result, he was booted out of office last year and Cristina Kirchner returned to power as vice president. As expected, Argentina last May defaulted again on $65 billion of debt.

Argentine politics looms large in Uruguay. Montevideo, Uruguay's capital, is only a two-hour ferry ride across the River Plate from Buenos Aires. It would have been tempting for Lacalle Pou to opt for a Macri-style move once the COVID-19 epidemic hit. The new president, however, held his ground.

In a video with nearly 2 million Twitter views at the time of writing (Uruguay has a population of 3.5 million), Lacalle Pou explains that his government faced strong pressure to create new taxes on wealth and businesses, but that he had "emphatically rejected" these suggestions. Entrepreneurs, Lacalle Pou states, "are the ones who will push the country forward. But, in the pandemic, if we punish those who create businesses and jobs, those who produce, innovate, and trade, they will be left by the wayside," leaving everyone worse off as a result.

Instead of taxing wealth creators, Lacalle Pou decided to place an additional 20 percent tax on any state official—himself included—that earned over $1,900 per month: "We wanted to signal that the state has to make an extra effort, not private individuals. Because, once this is over, the state won't provide for the population," he said in the video, "it's the individual who will rev up the engines and move the country onwards."

Elevating the individual over the collective is extremely rare in Latin America, where statist, asset-destroying policies such as wealth taxes arise from the left and the right with equal frequency. Nor is Lacalle Pou's defense of free-market capitalism a coronavirus fluke; even before the pandemic, he planned to make Uruguay far more attractive for foreign investors by easing the restrictions to set up tax residency in the country, a measure he already passed into law.

Under Lacalle Pou, Uruguay has handled the pandemic remarkably well. As The Economist noted, "by June 18th Uruguay had reported 849 confirmed cases and 24 deaths from covid-19, the lowest number as a share of the population of any country in South America." In fact, it was the only country in the region to execute a successful track-and-trace policy. Bloomberg News reports that this allowed Uruguay to avoid "a lockdown, harsh quarantines, or heavy-handed policing," despite having the largest percentage of elderly citizens in Latin America. Although schools and restaurants closed their doors, "shops and businesses were allowed to stay open." This only bolstered Lacalle Pou's initiative to allow an unshackled private sector to lead the economy out of the crisis.

Uruguayan libertarians are aware of their good fortune. Journalist Pris Guinovart describes Lacalle Pou as a classical liberal who publicly opposes the Hobbesian worldview of unrestricted state power and believes in limiting the size and scope of government. "He is firmly convinced of the importance, value, and need of more freedom in Uruguay and in the rest of the world," she adds.

For her part, Fischer, who also refers to the president as a classical liberal, says that Lacalle Pou's sound policies in office have come as a welcome surprise. His previous career as a congressman, she explains, suggested that he was not well prepared, had few ideas of his own, and seemed to have advanced in politics by riding his father's coattails.

Rather like Henry V, however, Lacalle Pou has shown "the mettle of his pasture" since assuming office. "We now know that he does have his own ideas and that he is an ardent lover of liberty," Fischer adds, "as he has proven with the way he handled the pandemic, without a mandatory lockdown and appealing to individual responsibility even against the general opinion of his closest advisers, who demanded the opposite."

Although it is still early in his term, Lacalle Pou has already proven to be a far better model to follow than Bolsonaro.

Daniel Raisbeck is a senior fellow at the Reason Foundation. He ran for mayor of Bogota, Colombia, in 2015 as an independent libertarian.