These big disruptions to the education system are not necessary to fight COVID-19. 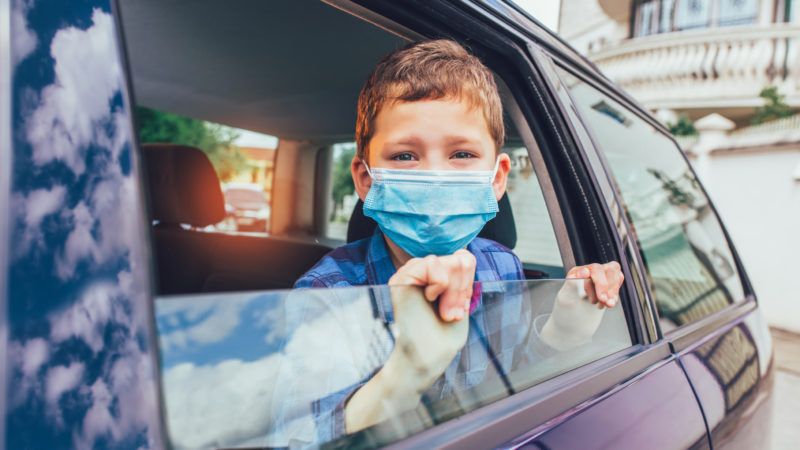 At a recent meeting to discuss back-to-school procedures amid the ongoing pandemic, officials representing a school district in Wake County, North Carolina, detailed a complicated plan that would require bus drivers to administer temperature checks to students.

Any student who failed the check would be denied entry onto the bus, and a parent would be summoned to come get them. But bus drivers can't leave kids alone at bus stops, so the entire bus would have to stay put until the child was retrieved.

"Bus driver should remain on the bus to continue supervising other students on the bus, while also visually monitoring the student," declared the proposed guidance. "Bus remains with the student until they have been picked up by their parent/guardian or until another transportation official arrives to supervise the student."

It should be obvious that this plan—which is maximally disruptive for all students, parents, and employees involved—will never work. You can easily imagine kids spending all day on a bus, their restlessness and frustration mounting, as the driver waits in vain for an adult who either couldn't be reached or can't leave work.

As educators across the country begin to plan how classes will function in the fall, many proposals to make schools safer from the virus involve heavy degrees of unreality: children in masks throughout the day, classrooms half empty to accommodate social distancing, playgrounds closed, heavy reliance on virtual instruction, and so on. These precautions are largely unworkable—it's no more reasonable to expect children to wear masks and avoid interacting with each other all day than it is to make the bus wait hours if somebody fails a temperature check.

They are also at odds with the current scientific consensus about the coronavirus: that the risk to young people is minimal, and that they do not seem to spread the virus easily.

There is much that we don't know for certain about COVID-19. But the available evidence suggests that reopening schools as close to normal as possible is the most pragmatic approach. In Wired, David Zweig has presented a compelling case that the U.S. should follow Europe's lead and let students go back to school with minimal disruption:

Let's review some facts: Children are, by and large, spared the effects of the virus. According to the latest data from the CDC, infants, little kids, and teenagers together have accounted for roughly 5 percent of all confirmed cases, and 0.06 percent of all reported deaths. The Covid-linked child inflammatory syndrome that received fervent media attention last month, while scary, has even more infinitesimal numbers. "Many serious childhood diseases are worse, both in possible outcomes and prevalence," said Charles Schleien, chair of pediatrics at Northwell Health in New York. Russell Viner, president of the UK's Royal College of Pediatrics and Child Health, noted that the syndrome was not "relevant" to any discussion related to schools.

There is also a wealth of evidence that children do not transmit the virus at the same rate as adults. While experts note that the precise transmission dynamics between children, or between children and adults, are "not well understood"—and indeed, some argue that the best evidence on this question is that "we do not have enough evidence"—many tend to think that the risk of contagion is diminished. Jonas F. Ludvigsson, a pediatrician and a professor of clinical epidemiology at Sweden's Karolinska Institute, reviewed the relevant research literature as of May 11 and concluded that, while it's "highly likely" children can transmit the virus causing Covid-19, they "seldom cause outbreaks." The World Health Organization's chief scientist, Soumya Swaminathan, suggested last month that "it does seem from what we know now that children are less capable of spreading" the disease, and Kristine Macartney, director of Australia's National Centre for Immunisation Research and Surveillance, noted a lack of evidence that school-aged children are superspreaders in her country. A study in Ireland found "no evidence of secondary transmission of Covid-19 from children attending school." And Kári Stefánsson, a leading researcher in Iceland, told The New Yorker that out of some 56,000 residents who have been tested, "there are only two examples where a child infected a parent. But there are lots of examples where parents infected children." Similar conclusions were drawn in a study of families in the Netherlands.

This is hardly surprising, given that closing the schools in the first place does not appear to have been a sound strategy for containing the coronavirus. Studies in JAMA Pediatrics and The Lancet have found ample reason to doubt whether school closures saved a significant number of lives. As Mother Jones' Kevin Drum pointed out in a review of the scientific literature, closures "have (a) little effect and (b) are probably nowhere near worth the tremendous impact they have on both parents and kids."

That's an important point: Reducing the amount of time that children spend at school is terribly burdensome for many parents who rely on school's day care effect. Keep in mind that public schools are funded through taxes. It's hardly fair for the state to confiscate vast sums of money from its citizens, in part for the purpose of child care, and then suddenly cease offering this service while keeping the money. States that want to make it possible for people to return to work—for the economy to reopen—really need to prioritize schools: They are among the first elements of public life that must return to a semblance of normality, and the risks seem comparatively low.

It won't be possible to have a completely normal school year, of course. Officials should axe egregiously risky activities—no indoor pep rallies, for instance—and adult school employees might very well opt to wear masks or take other precautions, especially if they are elderly or immunocompromised. Wherever possible, district officials should make it possible for at-risk employees to work from home, or even to take the semester off. But they should not force kids to stay at home, clinging to the delusion that distance learning under these circumstances is anything other than an horrible burden on parents, and they should not force kids to hermetically seal themselves in bubbles when they do return to class.