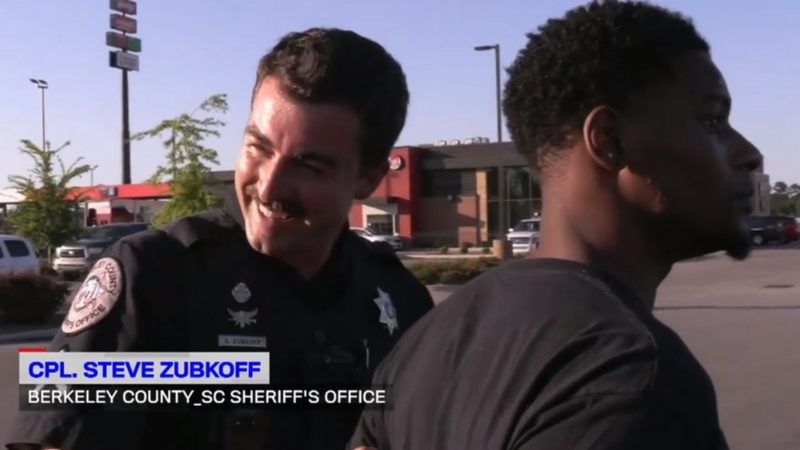 "You see my legs shakin', man? I'm nervous!" says a black man in handcuffs at a traffic stop in Berkley County, South Carolina. Cpl. Steve Zubkoff has detained him because he smelled marijuana in the car. The unidentified suspect is on probation, and it will turn out he has a blunt in his shoe, which he will eventually disclose to Zubkoff.

This is all captured on cameras on the most recent, and possibly last, episode of Live PD, a popular show on A&E that documents police responses to calls across the country. On Wednesday, in the midst of growing anger about police conduct in America, the show was cancelled. That announcement comes just a day after the Paramount Network cancelled Cops, the decades-old series that pioneered the police-reality-show format.

These shows, and others like them, have turned human misery into entertainment while perpetuating narratives about alleged the need for the drug war and for the strong hand of the police to keep the people in line. In the Berkley County clip, the deputy seems almost amused at the young man's nervousness; the audience is primed to find his reactions comical. But his nervousness comes from a real place. Even as Americans turn more and more against the drug war, especially for marijuana, there are places in America where the young man could still be sent back to jail for a long time for that blunt in his shoe. Many encounters on these shows revolve around drug possession.

That doesn't happen here, or at least not onscreen. But Cpl. Zubkoff, amazingly, lectures the man on how to have "better interactions" with police—and the man apologizes for being nervous. There will be no introspection on camera about whether any of what just happened helped in any way to protect public safety.

These programs have been terrible for our understanding of policing and criminal justice, and we should not treat them as some sort of innocent victims of cancel culture. Shows like these turned their cameras on desperate people living on the margins of society, then made them grist for spectacles of mockery. They present themselves as windows into the world of policing, but what they really do is show snippets of people on the worst days of our lives. And despite a bland disclaimer reminding us that these people are innocent until proven guilty, they invite us to judge them for how they behave during a short television segment.

Live PD host Dan Abrams has expressed shock at his show's cancellation, tweeting that the series was an "effort at transparency in policing." In fact, Live PD itself is in the middle of a transparency scandal. In March 2019, the show filmed an incident in which police attempted to pull over Javier Ambler, 40, after he failed to dim his high beams for oncoming traffic in North Austin, Texas. He didn't stop, and police chased him for 20 minutes. He crashed. When Ambler left his vehicle, police ordered him to the ground and used Tasers repeatedly on him, even as he said he had congestive heart failure and told police he couldn't breathe. He subsequently died in police custody.

We know what happened not from Live PD but from police body camera footage—footage that was only made available after Williamson County cleared the deputies involved of any misconduct. Live PD explained later that it does not show sequences that involve a fatality. But it also never provided the footage to investigators, and it destroyed the footage after investigators concluded their investigation.

Abrams wrote after the show was cancelled that he genuinely believed that Live PD helped further the cause of transparency:

I completely agree with advocates calling for more body cams on officers and more uniform rules for their use. It seems to me that the antidote to bad policing and officers is transparency and that means more body cams and more shows like Live PD. It's important to distinguish Live PD from a show like Cops that just presented a highlight reel of crazy moments. Live PD was totally different—following the officers in real time, in their real environments showing the nerves, the adrenaline, the bad, the good, and often the mundane and boring.

What Abrams doesn't seem to grasp here is that his show's contextless "transparency" showed only one side of every encounter—the police's.

If you watch the show, you will see plenty of solid police professionalism and even kindness and compassion on display. But the same problem persists. In another scene in South Carolina, some cops pull up in a suburban neighborhood in the middle of a day because somebody called 911 claiming a fight was going on. There was no fight. It was a group of middle-aged suburban black men (all alumni from the same fraternity) having a barbecue. Everything was handled fine from the police's end. But we never find out why somebody called the police on them, how often that sort of thing happens to these barbecuers, or what the men themselves think about having cops show up.

Live PD often inadvertently illustrates something the Defund Police movement talks about a lot: that officers with guns and body armor and Tasers are being sent to deal with people who aren't committing significant crimes against people or property. One episode opens with deputies in Florida responding to a minor fight between a clearly drunk woman and her ex. Five sheriff's department vehicles rolled into a cul-de-sac to deal with this. It is extremely uncomfortable to watch, unless you find somebody else's misery and loneliness entertaining. Sadly, some people do.

These shows don't provide real transparency. They're one-sided views of policing with carefully controlled narratives that put officers on one side and cast the rest of us as "the other"—victims, villains, nuisances, whatever. The biggest flaw in these shows is that they think we're the ones who need to be educated about the state of policing, not them.

Bonus link: Andrew Heaton, a Reason regular, just interviewed me about the Defund Police movement for his podcast The Political Orphanage.