In the age of coronavirus, they are a danger to the lives of people both inside them and outside. 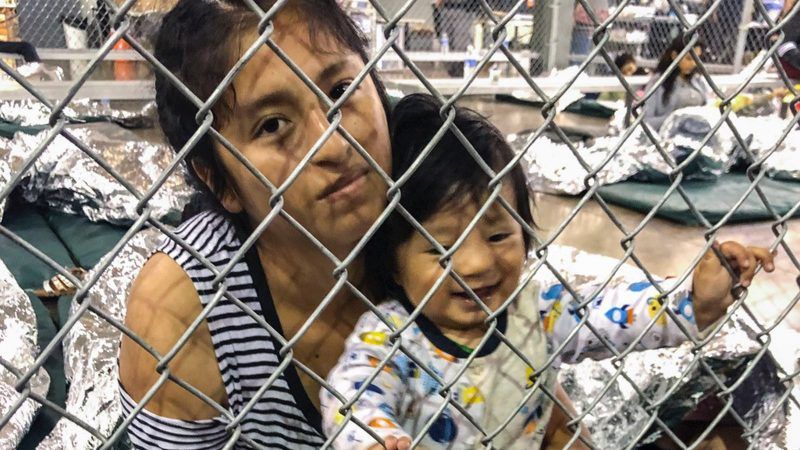 America's immigration detention system was a travesty before the coronavirus outbreak. But now it has also become dangerous, not just to the health of those in it but also those on the outside. It's way past time to release the detainees and dismantle this awful edifice.

One does not need a degree in epidemiology to understand that the cramped and unhygienic living conditions in the 22 detention camps and hundreds of county jails used by the Immigration and Customs Enforcement (ICE) are fertile breeding grounds for the virus. ICE isn't known for transparency—it took a whole year to report a 2018 mumps outbreak—but it is already reporting that nearly 1,600 of its inmates have contracted the coronavirus, compared to 287 on April 23. Last month, COVID-19 cases in Texas' 10 detention centers quadrupled in two weeks.

Thanks to its grossly inadequate capacity, ICE has tested less than 8 percent of its 35,000 or so inmate population—but close to 50 percent of those tested have come back positive. A few detainees have already died from the coronavirus, and the actual death count might be higher, according to the University of Denver criminal immigration law expert César Cuauhtémoc García Hernández. Why? Because the agency might be releasing those with symptoms so that they die at home instead of on its watch.

All of this is causing unrest among the detainees. Hunger strikes are raging in several ICE centers. In the Farmville detention center, about 160 miles southwest of D.C., hundreds went on strike during the initial weeks of the pandemic.

The conditions in the camps are straight out of Orange is the New Black. In Louisiana's LaSalle facility, 80 people are crammed into dorms lined with bunk beds. They have six toilets, three showers, one microwave and eight sinks between them. They even have to fight over bars of soap. And in those in repurposed county jails, the situation tends to be even worse.

Social distancing is impossible. Detainees have complained to investigators from the Project on Government Oversight (POGO) that ICE does not even provide them safety information or adequate disinfecting supplies. LaSalle guards don't always make it a point to wear protective gear inside the facilities. And when the detainees protested, POGO reports, they were met with pepper spray. Unsurprisingly, days after POGO published its report, scores of inmates tested positive for the virus. The families of two guards—not ICE itself, mind you—revelaed that they died from the virus.

ICE says it has made adequate arrangements to protect those in its care. But what does that mean? In New Jersey's Hudson County Correctional facility and elsewhere, coronavirus positive detainees get quarantined and everyone else gets locked up in their cells for 23 hours a day, apparently to reduce the amount of communal time. Detention centers have completely stopped all visits by family members, and some segregate immigrants in separate floors, depending upon whether they have been exposed to someone who has tested positive. But that doesn't protect them from non-quarantined ICE staffers who go home every evening. Worse, detainees told POGO that ICE routinely ignores people presenting symptoms and doesn't provide timely medical care, leading sometimes to horrific situations.

And ICE stonewalls family members when their loved ones fall sick, hiding behind privacy laws. ICE would not even tell the family of a coronavirus-positive detainee at its Otay Mesa facility, one of the worst hit, whether he was alive, let alone what kind of care he was receiving. He was suffering from pulmonary embolism, ulcers, and a hernia yet ICE was refusing to release him. "They treat them like animals," wailed his mom.

That particular prisoner, Noe Perez, 41, was awaiting deportation because, evidently, serving a 22-year prison sentence for assault with a firearm as a teenager wasn't enough. That sort of record is far from the norm: As the Transactional Records Access Clearinghouse at Syracuse University points out, most civil immigrant ICE detainees do not have a single criminal conviction. In March 2020, in fact, 61.2 percent of the detainees had no conviction, not even for a minor petty offense. Even among immigrant detainees who do have a conviction, few are for the sorts of serious crimes that pose a threat to public safety. As of July 2019, just one in 10 detainees—less than 6,000 detainees nationwide—had a serious criminal conviction on record. That's a five-year low.

That's not surprising, given that the Trump administration scrapped the late-Obama-era policy of apprehending only serious criminals during interior roundups. It also started locking up asylum seekers rather than releasing them while their application is considered, even if they had passed an initial screening showing they had a "credible fear" of persecution or harm back home.

All of this has caused the detained population to explode. At its peak last July, Garcia Hernandez's data shows, 55,654 immigrants were in detention—an all-time high—even though Congress had previously appropriated funds only for around 39,000. To confine the extra population, the Trump administration repurposed funds from elsewhere in the Department of Homeland Security.

Nothing in the law actually mandates that these folks be kept under lock and key. It's an administrative policy choice meant to advance Trump's harsh anti-immigration agenda. There is little risk to public safety from releasing asylum seekers. And few of them would want to abscond before their final hearing, since they don't want to give up their shot of living in the country legally. If the government is really worried that they will, it could keep an eye on them much less invasively—and, in the the age of coronavirus, much more safely—by fitting them with electronic ankle bracelets.

After the pandemic erupted, the detained population has shrunk by about a third. Some of that might be attributed to fewer interior roundups. But the bigger and more perverse reason for the reduction, according to Garcia Hernandez, is that the administration has been using the coronavirus as an excuse to illegally turn away asylum seekers without any due process, even unaccompanied minors. It recently even tried to reinvent its notorious child separation policy by offering migrant parents the choice of abandoning their asylum petitions and accepting deportation in exchange for letting their kids get out of detention and remain in America. Unsurprisingly, the vast majority declined.

Migrant rights outfits have filed close to 50 lawsuits and secured the release of a few hundred medically vulnerable detainees, arguing among other things that consigning them to illness and death for these immigration infractions violates the Eighth Amendment's prohibition against cruel and unusual punishment. Yet when Attorney General Bob Barr ordered federal prisons to "immediately maximize" the release of prisoners to home confinement to prevent the spread of the virus, he demanded no systematic review of the imprisoned immigrants. Even as federal prisons release Americans who committed real crimes, immigrants who committed no crime are likely to remain locked up.

But individual ICE facilities don't need permission from the top to release immigrants. They have total discretion to "parole" anyone not subject to mandatory detention—that is, the majority  of those in their custody given that they are in for civil not criminal violations.

They should do that. And Congress should defund a detention program whose only purpose is to terrorize peaceful immigrants looking for jobs or safety in America—along with creating more expansive guest worker and asylum programs, so that no one has to live here illegally. And the undocumented immigrants already in the country should get legal status pronto, ending the draconian interior roundups that are breaking up and traumatizing Latino communities. The small subset of criminally inclined intercepted at the border or picked up in America can be held in other venues until they are deported.

This is not just a matter of returning some humanity and fairness to America's immigration system. It's a matter of protecting general public health. Many of these detention centers are located in rural areas with rudimentary medical facilities that struggle to meet basic health care needs even in normal times. It won't take much to overwhelm them, or for secondary outbreaks to ricochet through their communities.

The pandemic has thrown the hidden dangers of America's institutions of mass incarceration into sharp relief. These institutions are particularly tragic when they are used to lock up peaceful people whose only crime is to search for a better life for themselves—and to provide one for Americans. These detention facilities had no good reason to exist before the coronavirus. They have even less now.