The president has said he's willing to deploy active-duty military personnel to cities and states that aren't doing enough to crackdown on street violence. 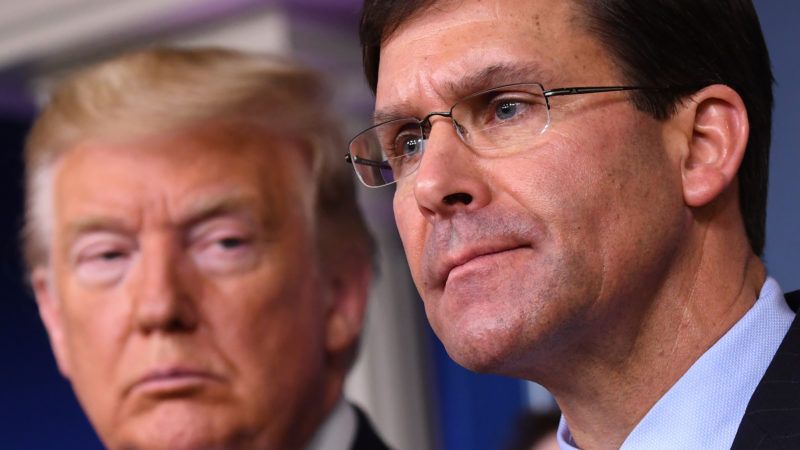 "The option to use active-duty forces in a law enforcement role should only be used as a matter of last resort, and only in the most urgent and dire of situations," Esper said at a press conference today, according to CNN. "We are not in one of those situations now."

His remarks contradicted Trump's comments earlier in the week, when the president said he would take it upon himself to deploy the military to areas where local and state officials aren't doing enough to prevent street violence.

"If a city or state refuses to take the actions necessary to defend the life and property of their residents, then I will deploy the United States military and quickly solve the problem for them," Trump said in a Rose Garden speech on Monday, reports The New York Times.

The Posse Comitatus Act generally prohibits the military from acting as domestic law enforcement. In order to put soldiers on city streets, Trump would have to invoke the Insurrection Act. That long-standing law gives the president the authority to deploy the military personnel to states overcome by domestic revolts or civil unrest.

State governments generally have to request the federal government's assistance first, although there is some room for the president to invoke the Insurrection Act unilaterally if the execution of federal law is threatened. Today, Esper effectively said it wasn't.

So far, no governors have requested federal military assistance, although 23 governors had activated their state's National Guard as of Monday.

CNN reports that Esper's comments have not gone over well with Trump, who has already expressed frustration with his defense secretary.

Regardless of his comments today, Politico reports that Esper has moved 1,600 active-duty Army troops into the Washington, D.C., area. Trump also activated D.C.'s contingent of the National Guard, which been helping to police protests in the city.

For the moment it appears that the property destruction and violent police crackdowns that have come with the last week of demonstrations are starting to die down. D.C.'s protest yesterday was drama-free.

Trump's comments about deploying the military to handle protests can only threaten this tenuous peace.