A member of the five-month-old company's board has been touting bogus stats about America's supposed dependency on Chinese-made drugs. 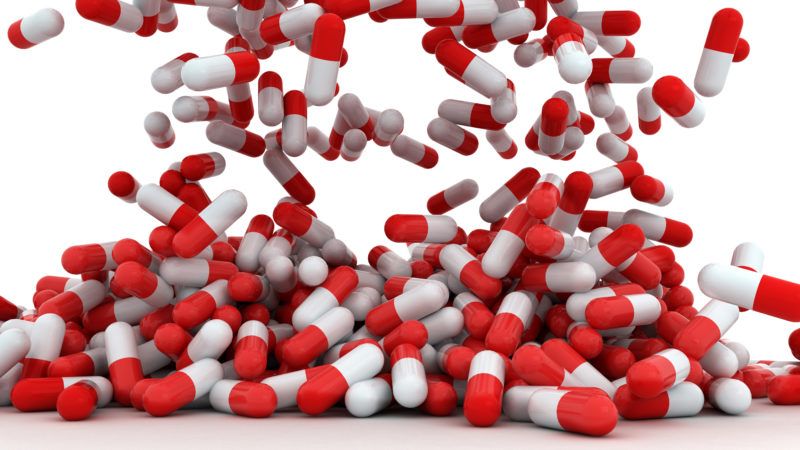 The Trump administration just handed a $350 million contract to a relatively unknown Virginia-based pharmaceutical company that doesn't have any history of mass producing pharmaceutical drugs and appears to have been founded this year for the purpose of cashing in on protectionist politics.

The contract is one of the largest ever given by the federal government to a single pharmaceutical company, according to BioPharma Dive, a trade publication. "While that's noteworthy in itself," it noted, "it's made more so by the fact that Phlow is a relatively unknown entity in the drug manufacturing world."

Indeed, the company was only founded in January. Despite that, a Phlow spokesman told BioPharma Dive that the company's leaders had been "communicating with government officials about the U.S. pharmaceutical supply for more than a year" and that Phlow's "stated mission" is "reducing the U.S.' dependence on foreign supply chains."

Phlow Corp. "has no track record in drug manufacturing, and it's not clear when its assembly lines will begin churning out products," Politico reports. The whole arrangement leaves the impression that the contract awarded to Phlow Corp. has more to do with politics than pharmaceuticals.

Nevertheless, White House officials called this week's deal with Phlow Corp. a "landmark" accomplishment, according to The Washington Post. "This is a great day for America," White House trade advisor Peter Navarro told the paper. "This has all of the elements of the Trump strategy."

If that's true, then President Donald Trump's strategy looks a lot like crony capitalism built on a misunderstanding of economics and trade—specifically, the global trade in pharmaceutical products. The Phlow Corp. contract will inject millions of taxpayer dollars into a single company, but the effort is unlikely to do much to reshape those pharmaceutical supply lines. It is perhaps the best signal yet that the protectionism sought by Republican neo-nationalists is just corporatism in a new wrapper.

Even setting aside the possibility of cronyism, the deal is both unnecessary and likely to be ineffective.

Ineffective because a few hundred million dollars won't address the biggest obstacle to manufacturing drugs in the United States. "The investment that would be needed to restart some of the API [active pharmaceutical ingredient] business here in the U.S., especially with much more stringent [environmental] and wastewater requirements, it's really unrealistic to think that could be done and still be price competitive," Susan Capie, managing director of PharmaVantage, a New York-based consulting firm, told the Post.

Unnecessary because America's drug supply chains are not overly reliant on China.

"The United States' supply of medicine is very well diversified," writes Jacqueline Varas, director of immigration and trade policy for the American Action Forum, in a comprehensive review of America's pharmaceutical supply chains. "China does not supply anywhere close to a majority of APIs, antibiotics, or vaccines in the United States."

In 2019, the United States imported $127 billion worth of pharmaceutical goods. Ireland was the top source, according to data from the International Trade Commission (ITC). China ranked 17th, supplying just over 1 percent of those imports. Even though that category includes more than just drugs—the ITC also counts bandages, test kits, and some dental products as pharmaceutical goods—the overall picture shows no crippling dependence on Chinese products.

And all the emphasis on imported drugs also obscures a critical part of the picture. A 2019 FDA report shows that the United States has nearly twice as many API manufacturing facilities as China and more than any other nation in the world.

But why let the facts get in the way of some federal subsidies?

For months, media outlets ranging from the right-wing American Greatness to the center-left Atlantic have been claiming that 80 percent of America's drugs come from China. (I debunked this claim here.) The misleading statistic's source is often Rosemary Gibson, a senior fellow at the Hastings Center and the author of China RX, a 2018 book detailing "the risks of America's dependence on China for medicine." As I wrote, Gibson has

become the darling of right-wing media and politicians who see the coronavirus outbreak as an opportunity to ramp up a U.S.-China cold war. "All Our Drugs To Treat The Coronavirus Depend on Chinese Suppliers" noted a headline in The American Conservative on February 17 in which she argued that "we depend on China for 80 percent of the core components" that go into U.S. drugs. She had used the same "80 percent" stat in a December 13 article too, both times without attribution. In the December Politico piece highlighting how policy makers were worried about China "weaponizing" drug exports, Gibson was the first expert quoted. "Medicines can be used as a weapon of war against the United States," she warned.

Gibson has also been called to testify in front of Congress about this supposed threat. In March 12, she told the Senate Committee on Small Business and Entrepreneurship that "the United States faces an existential threat posed by China's control over the global supply of the ingredients in thousands of essential generic medicines." Her dire warnings about America's pharmaceutical supply chains have caught the eye of nationalist lawmakers like Sen. Josh Hawley (R-Mo.) and conservative pundits like National Review editor Rich Lowry.

It is probably not a coincidence that Gibson happens to be on the board of Phlow Corp.