Months After Soleimani's Assassination, Another Strike on Militias in Iraq

Rocket attacks and "precision defensive strikes" will bring us ever closer to truly endless war.

Matthew Petti | From the June 2020 issue 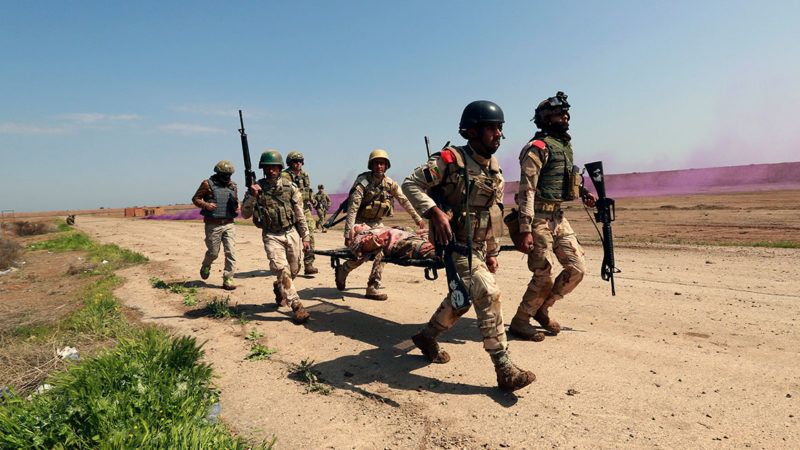 The administration of President Donald Trump promised to "restore deterrence" against Iran when it assassinated Iranian spymaster Gen. Qassem Soleimani outside Baghdad International Airport on January 3. But months later, the Iraqi militias formerly armed, trained, and advised by Soleimani seem undeterred, and American troops in Iraq find themselves in an escalating cycle of conflict with no end in sight.

In March, militia forces fired a barrage of Katyusha rockets at Camp Taji, killing a U.S. Army soldier, a U.S. Air Force airman, and a British servicewoman. A local militia close to Iranian intelligence services called Kata'ib Hezbollah appeared to take credit for the attack in a social media diatribe invoking the "right to resist" America's "malicious project of occupation."

Assassinating Soleimani was supposed to have prevented attacks like these, yet that act was also the result of escalating retaliation: In December, a rocket killed an American translator in Iraq. The Trump administration blamed Kata'ib Hezbollah (though the Iraqi government has since cast doubt on that claim), and U.S. forces retaliated with a round of strikes that killed 25 members of the militia.

In response, the Iraqi militia incited its supporters to ransack the U.S. Embassy in Baghdad. Trump called the incident his "Anti-Benghazi," referring to the deadly 2012 attack on a U.S. consulate in Libya. And then he ordered Soleimani killed.

The Trump administration initially justified the assassination by claiming that Soleimani posed an "imminent threat" to American lives, but it was later unable to identify any specific threat posed by Soleimani. The administration then gradually changed its justification to "restoring deterrence" against Iran.

"Restoring deterrence is not static," said Brian Hook, the State Department official in charge of Iranian affairs, at a February briefing hosted by the Middle East–focused, D.C.-based publication Al-Monitor. "It is a daily habit, and you've got to get that habit as part of your system, so we every day look for ways to get Iran to go back to its own borders."

Hook also called the Iranian government a "corrupt religious Mafia," hinting that the Trump administration does not see Iran as a state that can be reasoned with. "I don't know how the world's leading sponsor of terrorism is entitled to a claim of self-defense. They're not at peace with their neighbors, because they don't want to be at peace with their neighbors," he said.

Neither Hook nor Trump seemed to be very involved in how American forces responded to the March attacks. Defense Secretary Mark Esper signaled that he was not looking to escalate against Iran itself.

"I have spoken with the president. He's given me the authority to do what we need to do," Esper told reporters in March. "I'm not going to take any option off the table right now, but we are focused on the groups that we believe perpetrated this in Iraq."

America's military leadership has been more concerned with protecting its own personnel than in opening a new front with Iran. U.S. counterterrorism forces even secretly drafted plans to withdraw from Iraq in the wake of Soleimani's death, and the U.S. military is abandoning some of its smaller bases in the country.

But the Trump administration continues its campaign of "super maximum economic pressure" against the Iranian economy. Without a civilian effort to support coming to terms with Iran, rocket attacks and "precision defensive strikes" will bring us ever closer to truly endless war.

Matthew Petti is a national security reporter at The National Interest and a former Foreign Language Area Studies fellow at Columbia University.