Minnesota Churches Aren't Asking the Governor for Permission To Reopen

If the Mall of America can reopen on June 1, why can’t the Cathedral of St. Paul? 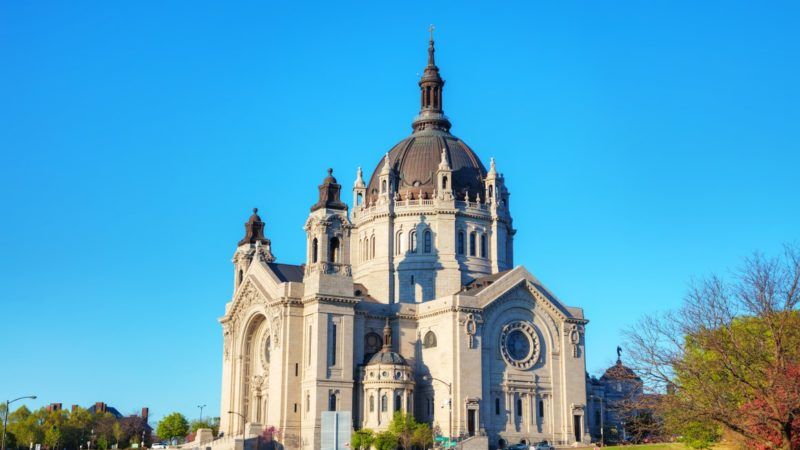 Some Minnesota churches have noticed their absence in Gov. Tim Walz's reopening plans and are taking matters into their own hands. Catholic and Lutheran leaders will allow churches in the state to start holding services in person starting May 26, even though Walz's reopening plan currently limits any gatherings, including church gatherings, to no more than 10 people.

On Wednesday, Walz announced the phased reopenings of bars, restaurants, salons, tattoo parlors, and some other businesses on June 1, with significant restrictions. Restaurants and bars will have to rely on outdoor dining, with tables at least six feet apart, and must operate at 50 percent capacity, with a cap of 50 people. Salons, tattoo parlors, and similar businesses will be allowed to reopen at 25 percent capacity. The Mall of America in Bloomington will be reopening on June 1.

And so representatives from the state's Catholic and Lutheran churches sent Walz and Attorney General Keith Ellison a letter Wednesday saying they're not willing to accept being treated differently from the "non-critical" businesses being allowing to reopen. Church leaders have given their congregations permission to resume in-person services on May 26, with certain hygiene and social distancing measures in place, and they're planning in-person Pentecost celebrations on Sunday, May 31. They're being represented by the Becket Fund for Religious Liberty, known for representing the Little Sisters of the Poor in its legal fight to be exempted from the Affordable Care Act's contraception mandates.

The Becket Fund's letter explains that

the Churches have been—and remain—leaders in protecting public health. They suspended in-person worship services voluntarily, and well before any of your stay-at-home directives required them to do so. As a result, for the past nine weeks, their congregations have not known the spiritual, mental, and social benefits that come from personal worship. Even with that loss, the Churches and their members have continued to follow public health guidance. Their religious convictions have spurred them to provide front-line care to those most vulnerable to COVID-19— from comforting those in dying moments with the anointing of the sick, to urging assistance to at-risk prisoners, to advocating for increased federal assistance to schools. And, as you know, the rigorous social distancing and hygiene measures that the Churches will implement for all in-person worship services are based on current guidance issued by the World Health Organization, the U.S. Centers for Disease Control and Prevention, and other public health authorities.

Those measures include limiting capacity to 33 percent, blocking off pews, allowing only families to sit near each other, controlling the flow of people in and out of the church, and a lot of sanitizing of surfaces. They won't be passing around collection plates, and you shouldn't expect to see a choir.

On a Thursday morning media call, Archbishop Bernard Hebda of the Archdiocese of St. Paul and Minneapolis; Rev. Dr. Lucas V. Woodford, president of the South District of the Lutheran Church Missouri Synod; and Eric Rassbach, vice president and senior counsel at Becket, said they'd prefer to work with Walz to coordinate the reopening, but they also made it clear that they're not willing to be treated as less important than Minnesota businesses.

"It is in times like these that people turn to the church for comfort, support and hope," Hebda said.

"It's not in our nature to push against the government," Woodford added. But "we have come to a point where we are conscience-bound." He described the decision to allow bars, restaurants, and malls but not churches to reopen as "extreme and inequitable."

Because worship is protected under the First Amendment, the government is generally restricted from targeting churches with special rules that don't apply to others. Laws need to be neutrally applied across the board. So if a state or city demands that churches close to prevent the spread of COVID-19, it needs to establish the same rules for any similar place of gathering. And the same holds true as states lift these restrictions. If California and Minnesota are going to start letting people gather in a limited basis in restaurants and bars and malls, why should churches be treated differently? What's the public health justification for that?

Federal courts have already intervened in other cases where governments have tried to establish special rules that only applied to churches, as when the mayor of Louisville, Kentucky, attempted to ban drive-in church services.

"It doesn't make common sense to say that Mall of America can open but not the Cathedral [of Saint Paul], especially given that the cathedral will be opening at a lower capacity," Rassbach explained.

Rassbach said they hadn't "officially" received a response from Walz or Ellison. But in a response to a query from KSTP, Walz's office issued a statement that took a conciliatory tone:

As the Governor has said, this is a challenging situation for him personally and a challenging situation for him as a public official charged with protecting the health and safety of Minnesotans. He remains in routine communication with faith leader[s] across the state and understands the toll this pandemic is taking on the spiritual health of Minnesotans. Governor Walz and the Minnesota Department of Health will be meeting with the Archdiocese this week.

That doesn't sound like a man planning a crackdown. But we'll find out for sure next week, when services return.