Plus: "Jane Roe" in Roe v. Wade says she was paid to lie about abortion, sailors who recovered from COVID-19 test positive again, and more... 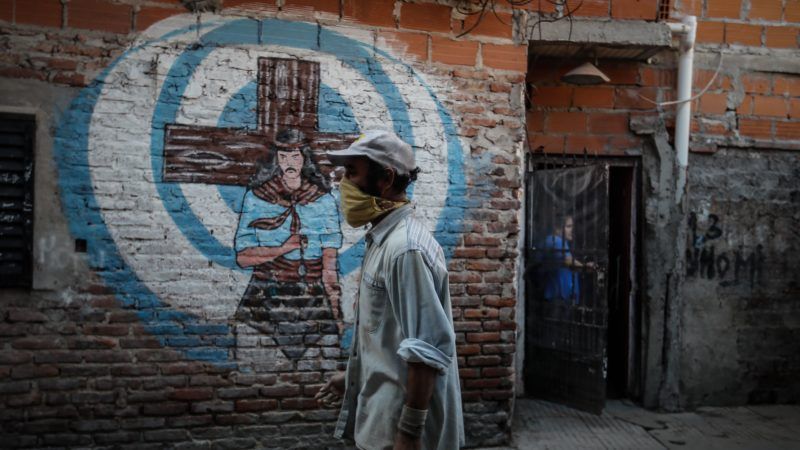 Developments abroad put a damper on hopes that U.S. life will return to normal soon. Areas of Argentina, Germany, Iran, and elsewhere have seen COVID-19 cases surge again after starting to ease shutdown rules. Now, authorities in these places are once again tightening the screws on citizens' movement, fraternization, and economic activity.

"When Iran began to reopen late last month, commuters packed subways and buses, young people lined up for takeout hamburgers and pizza, and traffic snarled highways," notes The New York Times. "Three weeks later, the country has been hit by a new surge of coronavirus cases, according to health officials in some of the eight provinces where the numbers have spiked again."

Germany has been heralded as a model of COVID-19 containment, but things aren't all rosy there, either. Several regions have been seeing new increases in number of cases, leading authorities in these areas to extend or reimpose lockdown orders that had been lifted.

Last week, just "days after lifting its weekslong lockdown, Lebanon imposed a new, four-day lockdown due to a spike in new cases," reports Business Insider. And Indonesia is postponing lifting lockdown rules after a new case spike so far in May.

Are Americans kidding ourselves if we think the worst of this outbreak is over for us? Signs point to yes.

"The Maryland Department of Health reported 1,784 newly confirmed COVID-19 cases on Tuesday, setting a new high mark four days after the state began reopening its economy," according to NPR.

Wisconsin has also been letting up on restrictions. An Illinois man who traveled to Wisconsin to partake in activities his state still banned told the Milwaukee Journal-Sentinel "I know it's probably bad. I'm just kind of done with it all."

And yet "coronavirus is certainly not done burning its way through the global population," the paper points out. "Wisconsin set a single-day record of cases Saturday as 502 people tested positive for the coronavirus."

Texas and Alabama have also seen surges in confirmed COVID-19 cases since starting to ease lockdown rules. But authorities in these states say the increases could be attributed to more testing, not increasing levels of outbreak. And there may also be data issues. "Texas health officials are combining some antibody tests along with more common viral tests in statewide COVID-19 tracking data," the Texas Observer reported last week.

Results in Arizona are also mixed.

Looking at these numbers, some will be tempted to call off the easing of lockdown orders or reinstitute strict rules. But these rules are only as good as the number of people willing to follow them—and both data and anecdotal evidence suggest that fewer and fewer people are. If the U.S. wants to avoid more COVID-19 case surges, we're going to need way more focus on how to mitigate transmission without simply shutting everything down and ordering people to stay home. The "open up" vs. "shut things down" dichotomy was never a good one; how well we fare going forward will depend on how fast we can move beyond it.

"If a young woman wants to have an abortion, that's no skin off my ass. That's why they call it choice," said Norma McCorvey—better known as "Jane Roe" (yes, that Roe)—in an interview with documentary filmmakers before she died in 2017.

Back in 1995, the woman at the center of the case that legalized abortion across the U.S. claimed to have had a change of heart. McCorvey said then she was opposed to legal abortion. But in newly released documentary footage, recorded in 2017, McCorvey said she only claimed to be against abortion because the anti-abortion group Operation Rescue had paid her to say so.

"With an issue like this there can be a temptation for different players to reduce 'Jane Roe' to an emblem or a trophy, and behind that is a real person with a real story. Norma was incredibly complex," said documentary director Nick Sweeney.

From The National Law Review:

The Attorney General argues that there is substantial government interest to (1) protect consumers from debt collectors that "wield undue influence in view of the coronavirus"; (2) protect the tranquility of the home while consumers are stuck inside and (3) protect consumer's well-being during the pandemic.

The Court did not find any of the government's interests to be persuasive.  There was no evidence that consumers are more susceptible to undue influence by debt collectors during the pandemic. Nor was there evidence that a debt collector is more likely to chase the consumer down in person. As to the argument regarding a consumer's well-being, the Court notes that the regulation simply provides relief for unwanted phone calls and does not actually offer any relief from the debt itself.

• McDonald's workers are suing over an alleged lack of protections against COVID-19.

• "Coronavirus cases are spiking from India to South Africa and Mexico in a clear indication the pandemic is far from over," reports the Associated Press. "Cases are still rising across Africa, where all 54 nations have seen confirmed infections for a total of over 88,000 cases and 2,800 deaths, according to the Africa Centers for Disease Control and Prevention." And "Latin America has seen more than 480,000 confirmed coronavirus cases and about 31,000 dead."

• A new study conducted by scientists from nine countries considers different lockdown strategies and suggests that the best option might involve tight "mitigation measures" for 50 days followed by easing these restrictions for 30 days.