Just try not to ask too many questions about what’s happening or why. 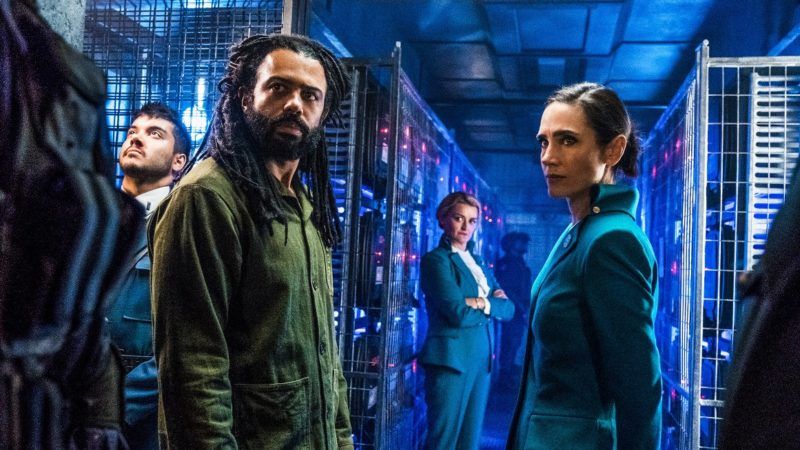 "Good morning," the train conductor announces with cheery good will. "The temperature outside is minus-119.6 degrees Celsius." And, she adds brightly, "It's now seven years or so since departure." And no, your junior-high-science memory of how to convert centigrade to Fahrenheit has been ruined by all those drugs you took. We're talking minus-184 in good old pre-metric numbers, cold enough to make even Budweiser taste pretty good.

That's the opening of the new TNT series Snowpiercer, which has a premise that would have made my buddies and I howl at the moon in enthralled delight back when we were 10 or so. Scientists trying to reverse global warming have screwed up and blown up the sun or something. (Seriously—at least, that's what it looks like in the animated precede that sets up the show's backstory.) So now we've got global freeze-your-balls-off instead, and the only survivors are a bunch of mammothly rich swine endlessly circling the planet In a 1001-car train that can never stop because doing so would, you know, freeze your balls off.

The glory of sci-fi back then was that hard questions were never thought of, much less asked. Where'd they get all the food to feed everybody, especially the meat? Why would you build a track over rickety bridges and through sketchy mountain passes under avalanche-prone peaks? Why not just stick to a simple oval in the middle of the Kansas flatland? What about fuel? And booze for the bar car? Or the economic plausibility of the aliens stuffing all those stupid Earthlings with food to fatten them up in the Twilight Zone episode "To Serve Man." ("It's a cookbook!") What did they do with the poop? And, speaking of trains, why didn't Charlie's wife just put a nickel in the lunch sack she handed him every time the MTA express  he was trapped aboard circled past the station?

Snowpiercer's producers, prudently anticipating that today's 10-year-olds are smarter, even if their parents aren't, has tried to distract from these mostly unanswerable questions with a pair of sideshows: one a barbarous incitement to class warfare, the other (more successful) an Agatha Christie-style mystery that might be titled Murder on the North Pole Express if you dressed it up just a little. (Homicidal reindeer! Elf cannibals! Mrs. Claus leaving a boiled snow bunny in Frosty's kitchen!)

They work rather well as long as you don't squint at them too hard. Their success is all the more surprising because Snowpiercer was widely suspected to be one of the all-time television bombs. Based on a crazed 2013 film of the same name by South Korean director Bong Joon-ho (which in turn derives from the French comic book Le Transperceneige), the television version of Snowpiercer has been through four years of development, two directors and two showrunners, one of whom took to Twitter to call the other "an idiot, a coward or a vichy motherfucker."

Beyond the basic concept of a supertrain racing around in the snow, this Snowpiercer is only loosely linked to its predecessors. The timelines are incompatible (the film took place 17 years after the train left the station; this one just seven years), relatively few of the original characters made it to this one, and the truly nutty rage of the film has been toned down.

But it's still lurking there. The train, created as a sort of ark for his 1-percenter pals by a mysterious zillionaire known only as Mr. Wilford, was nearly hijacked as it departed. Several hundred proles managed to board it and clamber into the caboose, where they've remained ever since, starved and sterilized and stomped-upon, planning at any moment to revolt and seize the train. Their dark, dank, tail-end of the train contrasts sharply and sickeningly with the Robin Leach-esque parks and nightclubs up front.

A 10-year-old might ask why the train security forces don't kill them or just cut the caboose loose and leave it behind to freeze. Not to mention why Mr. Wilford, who had enough money to feed not only his passengers but their pet alligators (apparently in the future that's a thing), could afford to equip his security forces with guns, forcing them into regular—and quite costly—hand-to-hand combat with the rebels.

That 10-year-old would be directed to shut up and pay attention to the other plot arc. A murder has been committed up in the train's posh front—and worse, it's the second one in two years, both in the same style, with all the limbs severed and, well, as a member of the train staff asks, "What about his dick?" The possible answers to that question probably should not be contemplated at the same time as another one, where does all that meat served up front, really come from.

To find the killer, Melanie Cavill (Jennifer Connelly), Mr. Wilford's right arm, promptly summons one of the stowaways from the caboose, Andre Layton, who before he broke into the train was a Detroit homicide detective. Unknown to Cavill, Layton (played by Daveed Diggs, who originated the color-crossed role of Thomas Jefferson in the original Broadway production of Hamilton) is also the leader of the planned revolt. Because he thinks working on the murder case will allow him to collect intelligence on the front the train, and because he's still a cop at heart), Layton accepts the assignment.

The smoothly played cat-and-mouse game between the equally deceptive Cavill and Layton is far more interesting than the class-warfare plot, partly because it's better written and partly because Connelly and Diggs are extraordinary talents. She won an Oscar for A Beautiful Mind, he a Tony for Hamilton and if Snowpiercer represents a step down from those productions, you'd never know it from their performances. Bobbing and weaving, keeping not only their characters but the audience guessing about what they're up to. Connelly's passionate delivery of a long soliloquy about how the murder is not just a routine crime but an existential threat to the train's carefully balanced ecosystem, even made me wonder if Snowpiercer amounts to something more than its obvious eat-the-rich pretensions. Could the show be launching a slyly subversive attack on planned economies? I thought about that for a moment, then went back to wondering what they do with all the poop. But with a smile.