"Nothing Betsy DeVos has done since she took office will have a more lasting effect on people's lives than this." 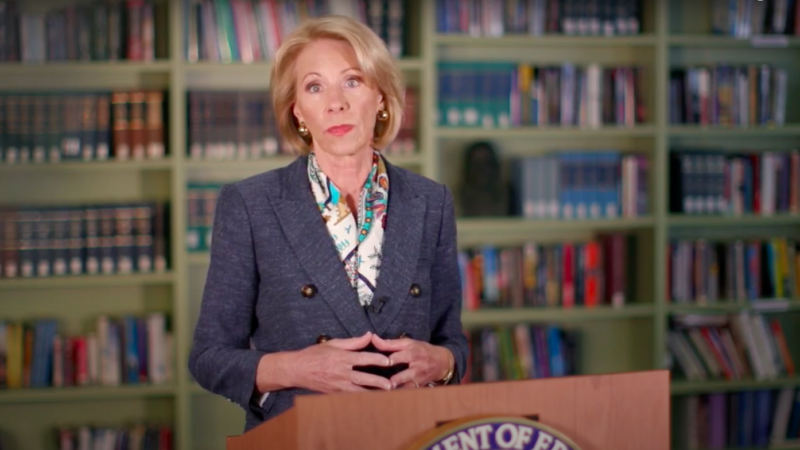 On Wednesday, Education Secretary Betsy DeVos formally announced the new rules related to Title IX—the federal statute that governs sexual misconduct in schools—thus completing a process that began more than a year ago, when the government first unveiled its proposed changes.

The new rules aim to protect victims of sexual misconduct while also establishing fairer procedures for the accused. The department believes the new rules will "balance the scales of justice on campuses across America," a Department of Education spokesperson said during today's press briefing.

Justin Dillon, an attorney with the firm KaiserDillon who specializes in campus misconduct adjudication, hailed the new rules as tremendously well thought out.

"Nothing Betsy DeVos has done since she took office will have a more lasting effect on people's lives than this," Dillon tells Reason. "It's frankly inspiring to see how hard she and her staff have worked to get these regulations done and get them right."

The new rules are similar to what the Department of Education proposed in November 2018. Most notably, the government has abolished the single-investigator model, which previously permitted a sole university official to investigate an accusation of misconduct, decide which evidence to consider, and produce a report recommending an outcome. Under the new rules, the final decision maker must be a different person than the investigator, and a finding of responsibility can only be rendered after a hearing in which a representative for the accused is able to pose questions to the accuser—i.e., cross-examination.

Importantly, the new rules narrow the scope of actionable sexual harassment to exclude conduct that ought to be protected under the First Amendment. Obama-era guidance had defined sexual harassment as "any unwelcome conduct of a sexual nature." The new rules keep this definition but add that the conduct must be offensive to a reasonable person, severe, and pervasive. In practice, this should mean that schools will no longer initiate Title IX investigations that impugn free speech.

"This new rule strikes a powerful blow against campus censorship," said a Department of Education spokesperson. "Campus free speech must not be sacrificed in the misguided pursuit of any other value."

The new rules will also end the pernicious practice of universities initiating Title IX investigations in cases where the alleged victims are not interested in this course of action. Under previous guidance, any university official who became aware of a potential Title IX issue had to report it, thus triggering an investigation. Under the new guidance, school employees should make the Title IX office aware of potential issues, which will prompt these officials to reach out and offer support to victims. But a formal complaint that results in adjudication can only be initiated by the victim or their parents/legal guardians. This approach gives agency to victims and prevents schools from taking actions contrary to their wishes.

Nevertheless, victims' rights advocates intend to fight the new rules in court. Catherine Lhamon, current chair of the U.S. Commission on Civil Rights and the former Obama administration official who presided over the changes that compromised due process, slammed the reforms as "taking us back to the bad old days, that predate my birth, when it was permissible to rape and sexually harass students with impunity." That's a gross misrepresentation of what DeVos has done, though not an unexpected one, given how irresponsibly activists and members of the media have characterized DeVos's work.

It remains to be seen whether colleges and universities will carefully follow the new rules—much is uncertain about the future of higher education right now. Nevertheless, today is a big day for the restoration of basic due process and free speech rights in schools.

The new rules, which take effect in August, are available here.