Trump's COVID-19 Testing Blueprint Is Another Attempt to Avoid Responsibility 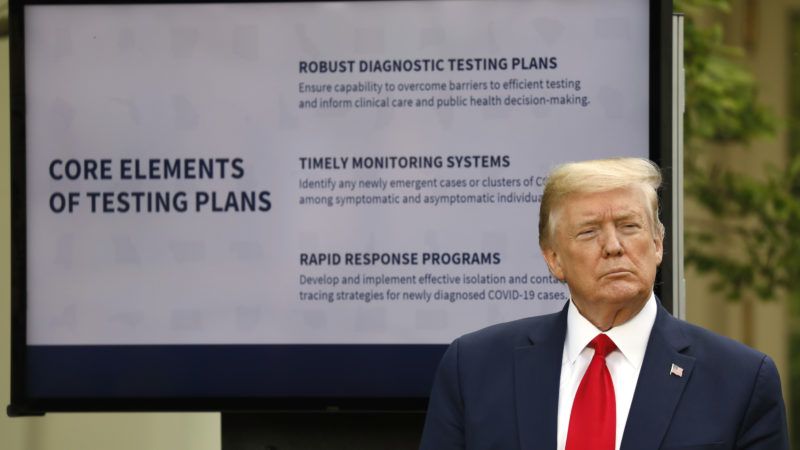 At a press conference last night, President Donald Trump unveiled two documents—a "Testing Overview" and a "Testing Blueprint"—that comprise the latest phase of his administration's plan for "opening up America again" amid the COVID-19 pandemic. These documents state that a big part ending the current pandemic lockdowns depends on testing for COVID-19 infections in symptomatic patients and by testing for antibodies in the broader population in order to determine how many people have already been exposed to the virus.

Diagnostic tests can be used to identify which patients with respiratory illnesses are actually infected with COVID-19 while also enabling the tracing and quarantining of their contacts who subsequently test positive. Antibody blood tests enable public health officials to figure out what percentage of the population has already been infected. Antibody tests provide a better idea of just how deadly the disease is and, one hopes, will also help to identify those individuals, now more or less immune to the disease, who can safely leave lockdown and resume their normal activities.

Reading through the two documents, it is apparent that the "Testing Overview" is largely an "alternative facts" narrative that aims to direct attention away from the egregious mistakes that the Trump administration committed with respect to diagnostic testing as the pandemic began to accelerate in January and February 2020. The "Testing Blueprint," meanwhile, makes it clear that the Trump administration will blame states and localities for any future failures with respect to diagnostic and antibody testing and contact tracing.

Let's delve first into the "Testing Overview." It features a timeline that purportedly details "the foundation for diagnostic testing." This timeline notes that the Centers for Disease Control and Prevention (CDC) started developing a diagnostic test to detect the coronavirus on January 10. That may seem like a timely beginning, but the timeline fails to mention that the CDC sent its badly botched test out on February 5. At the same time, the CDC stymied the development of alternative tests by academic and private laboratories.

In a section on mobilizing the private sector to develop tests, the "Testing Overview" reports that on January 21 the Biomedical Advanced Research and Development Authority convened leading diagnostic companies to develop COVID-19 tests. Nevertheless, the agency did not begin funding the development of such tests until the beginning of March. The "Testing Overview" notes that the Food and Drug Administration (FDA) got around to loosening its regulatory stranglehold on privately developed diagnostics on February 29. It further reports that the FDA's first emergency use authorization (EUA) was issued for a test developed by Roche on March 13. The good news is that once unleashed the private sector responded and as of yesterday there were 70 EUAs for tests.

Contrast the Trump administration's handling of testing with what Germany and South Korea did. German researchers developed and released their first COVID-19 diagnostic test on January 16. Similarly, South Korean public health officials met with private sector biotech companies on January 27 and urged them to develop a diagnostic test. The first South Korean diagnostic test developed by the private company Kogene Biotech was approved just a week later, one day before the CDC shipped its flawed test.

South Korea and the U.S. both reported their first COVID-19 cases on January 20. But because of differences in the deployment of diagnostic testing and the tracking of contacts, the disease trajectories of the two countries have starkly diverged. By the beginning of March, South Korea had tested 150,000 people compared to 2,150 in the U.S. Thanks in large part to proactive testing and contact tracking, the number of daily diagnosed cases of COVID-19 in South Korea peaked at 909 cases on February 29.

On March 13, President Trump announced that half a million tests would be available by the following week and that five million would be available by the beginning of April. In addition, the president announced that retail companies including Walgreens, CVS, Target, and Walmart would soon set up drive-through diagnostic test sites in their parking lots. The good news is that testing did begin to ramp up, but the promises of 500,000 tests within a week and five million by the end of March were not kept.

By March 20, the number of tests in the U.S. did rise by nearly 134,000 and by April 1 just over a million tests had been administered. But just four drive-through testing sites were open by March 28. The "Testing Overview" reports that 80 sites are now open. South Korea had 43 drive-through testing sites up and running before March 17. The five millionth diagnostic test promised for the end March was actually administered on April 25.

The administration's timeline amounts largely to an attempt to put a positive spin on the manifold failures of federal agencies to address the COVID-19 pandemic under the leadership of President Trump.

Now let's turn to the administration's "Testing Blueprint." What does it say about what comes next?

The "Testing Blueprint" is mostly hortatory, urging state governments to engage in salutary efforts such as "develop[ing] testing plans and rapid response programs," "maximiz[ing] the use of all available testing platforms and venues," and "develop[ing] and implement[ing] sentinel monitoring."

The "Testing Blueprint" places the primary responsibility on the states to fund and vastly expand coronavirus testing. It says that the following principles should guide the states as they develop and execute programs and plans including (1) testing every symptomatic patient promptly and accurately; (2) setting up sentinel monitoring sites to warn of imminent local outbreaks at places such as urgent care facilities, primary care clinics, and senior assisted living facilities where asymptomatic individuals can be tested; and (3) creating rapid response programs that enable quick isolation and contact tracing of individuals who test positive, whether they are symptomatic or asymptomatic. Ultimately, the "Testing Blueprint" is not much more than a list of sensible recommendations that may well be marginally helpful to state governments as they deal with the pandemic going forward.

The Trump administration is surely right that state lawmakers and state public health departments will have big roles to play in setting up disease testing and tracking systems. But at the same time, the administration's "Testing Blueprint" is a cynical political document, designed mostly to let Trump off the hook. It allows him to blame the states if disease control efforts go awry while enabling him to avoid taking any responsibility for the health and economic harms that resulted from his administration's mishandling of the COVID-19 pandemic.