I Ran for Governor of Oklahoma Against Tiger King's Joe Exotic

Lessons learned from the zookeeper Netflix made famous 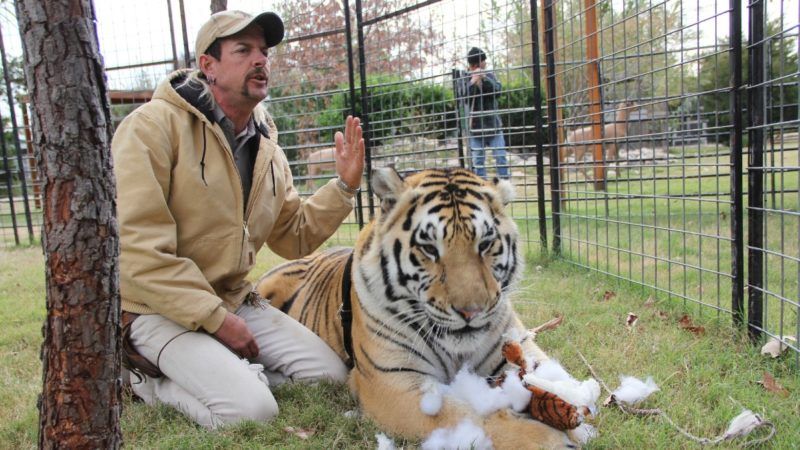 I was the first member of the Oklahoma Libertarian Party to enter the 2018 gubernatorial race, but I wasn't the most famous. Approximately 45 days after I declared my candidacy, I learned that a man with much more notoriety had entered the Libertarian primary: Joseph "Joe Exotic" Maldonado.

The world knows Joe now, thanks to the Netflix documentary Tiger King. He's a mulleted zookeeper, ordained minister, amateur demolitions expert, country-music lip-syncher, former write-in presidential candidate, and gay polygamist with two straight husbands. After the race, he would achieve even more attention, thanks to a murder-for-hire charge and a slew of animal cruelty violations. I had expected to spend the campaign talking about improving the education system or renegotiating the state's contracts with private prisons. I spent more time trying to shield the Libertarian brand from an eccentric showman whose peculiar platform didn't exactly match the party's usual positions.

My first few weeks as a candidate went pretty much as I expected—better, even. I was interviewed on radio and television. I shared the stage at candidate forums. I communicated with all sorts of voters on Facebook. I laid out libertarian approaches to a range of important issues, from reforming the school funding formula to solving the western Oklahoma water shortage.

Then my campaign manager called to tell me that Joe Exotic had entered the race. I wasn't aware of his minor celebrity status, so when I Googled my opponent, I was more than a little surprised at what I saw.

Have you ever seen one of the videos Maldonado posted during his independent presidential campaign? If you haven't, you should watch one: They're wild.

Picture an angry two-tone mullet with a hand cannon on his hip stomping angrily around a cage full of tigers, ranting in a nasal southern drawl. He made around 50 of these, and I watched every one of them.

This video binge taught me a lot about Maldonado. For one thing, it taught me that he wasn't actually a libertarian.

Joe's health care policy was socialized medicine, straight out of the Bernie Sanders playbook. His environmental policy was to shut down any businesses that pollute—period. His immigration policy was to sell citizenship: "Charge 'em 60 bucks for a visa. Make 'em spend thousands on citizenship. We don't want their poor people. We want their rich ones."

And he had a knack for attracting an audience. This flamboyant, charismatic guy would campaign from the top of his limo, passing out condoms and rolling papers with his face imprinted on them. He was a media magnet, but he was dragging a bunch of contradictory, statist proposals with him. It could undo everything the other candidate and I were doing to explain our platform to the public. This, I decided, was a threat.

Joe, on the other hand, didn't see us as a threat. Indeed, he welcomed us with open arms at his zoo. To my surprise, I liked him.

We spent several afternoons at his animal park, walking around, talking about politics, philosophy, and life. He seemed like a nice guy. No, seriously: He's friendly and engaging, he's sincere in his beliefs, he listens when you speak, and his comments are usually thoughtful, even when they're also off-color or extreme.

"You don't have to shut down a refinery because they pollute. You could make them pay restitution and fix as much damage as possible," I told him once.

"Fuck 'em. Some damage can't be undone, and there's no amount of money that can fix losing your kid from cancer. Them bastards don't care until you hit their wallets." he replied.

I especially enjoyed listening to him talk about cats. Get him going on the subject, and he'll give you a primer about feline genetics and how environmental specialization has contributed to tigers' near extinction. One thing the Netflix series didn't cover was his cooperation with research facilities around the country to find ways to help cats survive in more diverse environments. Thanks to Netflix, we know that his treatment of the animals was sometimes questionable, even criminal. But I can't dispute his devotion to the species.

Given his jumbled ideology, he would have done better running as an independent than as a Libertarian. I don't think he understood his disadvantaged position until after the first debate of the campaign. Besides me, he was up against Chris Powell, a former chairman of the state party. Joe spoke in his typically energetic style, telling the group that he wasn't going to change, that he wouldn't wear a suit, that he'd be real and not "blow smoke up their butt." The big-government elements of his platform did not sit well with the liberty-minded audience. He wanted to legalize marijuana (great!) and "tax the shit out of it" (ouch!) to get $8 million a month. That $8 million dollars was supposed to provide free health care for every Oklahoman (the state Health Board estimates that this would actually cost $260 million annually) and meet the public schools' budget shortfall (another $80 million that year, according to the state Board of Education).

He also commented that Chris Powell wasn't his type, sexually speaking, but that it was too bad I was straight because he'd like to "give me a shot." I wasn't sure how to answer that in a political forum.

His performance elicited polite applause, and more than a few uncomfortable chuckles. But the enthusiasm he was anticipating wasn't there.

After that, I started receiving text messages and calls from him on a more regular basis, asking how different policies would sit. His campaign manager, Josh Dial, also started contacting both my manager and myself on a frequent basis. Over the course of the campaign, Dial became a bona fide libertarian. But Joe was going to be Joe.

In informal online polling, Maldonado could mobilize his following to create the appearance of success. But when the actual voting happened, he lost pretty badly. Chris Powell finished first, with 48.9 percent. I was second, with 32.4 percent. Joe Exotic got just 18.7 percent. Powell then beat me in the runoff.

Meanwhile, some people associated with Joe's zoo started sending me cryptic messages declaring that they "knew where the bodies were buried." (This turned out to be a literal reference to the bodies of executed tigers.) Less than a month after the runoff, he was arrested. At the 2019 state convention, his party membership was revoked by unanimous consent.

People say any coverage is good coverage, but it's not true. When I ran into outreach problems on the campaign trail, it wasn't because of my sometimes radical policy prescriptions: Almost everyone was willing to discuss and at least think about those. It was because people had heard the Libertarians were the party whose candidates for national chair included a guy who took off his clothes onstage. The party whose national vice chair had called veterans murderers. The party that attracted a candidate like Joe Exotic, the Tiger King.

Rex Lawhorn, a former Libertarian candidate for governor of Oklahoma, is a political activist, outdoorsman, and sustainable living enthusiast.