Plus: Test Americans for the coronavirus every seven days? And more... 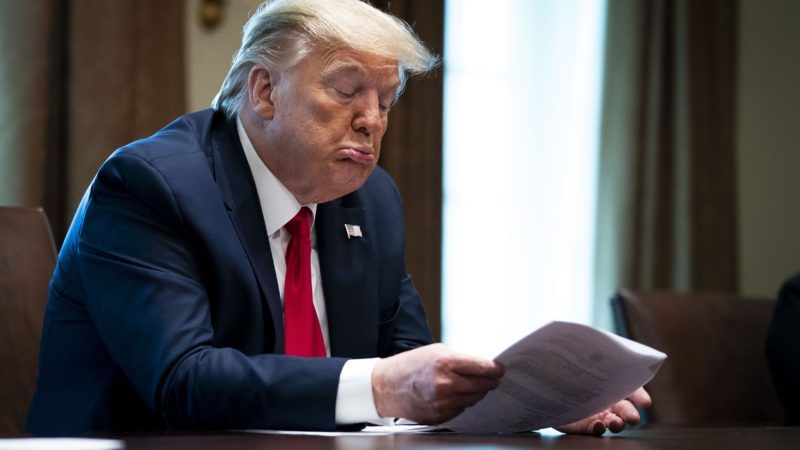 Trump takes credit for $1,200 checks. COVID-19 relief payments may be delayed by President Donald Trump demanding his name be printed on them. Trump's name will now appear in the memo line of each "Economic Impact Payment" made by paper check.

This "unprecedented decision, finalized late Monday" may "slow their delivery by a few days," notes The Washington Post, citing IRS officials as the source. ("Treasury officials disputed that the checks would be delayed," the Post states.)

For many people, delayed funds won't be a big deal. But a whole lot of Americans have lost jobs, businesses, and other money-making opportunities. Food banks, unemployment offices, private charities, and mutual aid funds are all overwhelmed. A delay by a few days could mean the difference between having food and other basic necessities or going without.

It is standard practice for a civil servant to sign checks issued by the Treasury Department to ensure that government payments are nonpartisan. https://t.co/k99wAxG6Vi

Regardless of whether this has or will hold up checks being sent out, the move is just one more sign of petty vanity and self-centered thinking from the president, who has spent way too much of this crisis raving about his ratings, lashing out at the media, and complaining that governors aren't groveling enough for federal emergency supplies.

"Trump had privately suggested to Treasury Secretary Steven Mnuchin, who oversees the IRS, to allow the president to formally sign the checks, according to three administration officials who spoke on the condition of anonymity because they were not authorized to speak publicly," the Post adds. "But the president is not an authorized signer for legal disbursements by the U.S. Treasury. It is standard practice for a civil servant to sign checks issued by the Treasury Department to ensure that government payments are nonpartisan."

People who have previously gotten tax refunds via direct deposit will have their COVID-19 relief money distributed that way and are already seeing the funds show up. (Mine was in my checking account as of this morning.) Paper checks will start being mailed out soon, in a staggered manner, with the last checks not expected to be mailed until September.

What Singapore's backslide means for the U.S. Singapore is back on lockdown, after it seemed like stringent early containment measures had fared well against COVID-19.

"What Singapore was doing," writes The New York Times' Aaron E. Carroll, "dwarfs what most are discussing in the United States. Its present circumstances bode poorly for our ability to remain open for a long time."

Our best hope, argues economist and New York University professor Paul Romer, is for 7 percent of the U.S. population to be tested for COVID-19 each day, or about once every two weeks per person. The Times explains more:

[Romer] argues that even if there are plenty of false negatives, if we committed to isolating everyone with a positive test, we could keep the vast majority of Americans out and about in normal life. All told, that would mean 150 million tests a week.

Critics will argue that's impossible. We cannot even seem to manage a million a day. They say we lack the materials, as well as the reagents for chemical analysis, the delivery infrastructure and the machines to run so many tests.

Mr. Romer is not dissuaded. "I've been focused on a single idea my whole career, that just because something is unfamiliar doesn't mean it's impossible," he said. "Building interstate highways, scanning every book, going to the moon—these were all outrageous ideas at one time. But if we put enough resources and our minds behind it, we are able to make the impossible possible."

His plan would rely less on contact tracing and isolation, since everyone would be tested regularly, and this might make infection control easier in many parts of the country.

This is outrageous: instead of passing emergency vote by mail law, Kentucky GOP enacted new voter ID law when DMVs are closed & voters can't get ID needed to vote & it will go into effect in same year Mitch McConnell up for re-election https://t.co/sXJ8Eny41Q

The New Prohibition, like the old Prohibition, will take an incredible toll on bars, bartenders, and their patrons.

But that doesn't mean there aren't reasons to hope. https://t.co/mUU1d7SiDz

I just shared my best pro tip ever with a neighbor and it reminded me to once again share it with all of you.

If you save this as a contact in your phone it will solve your "ducking" autocorrect problem. pic.twitter.com/ESWRHk947I